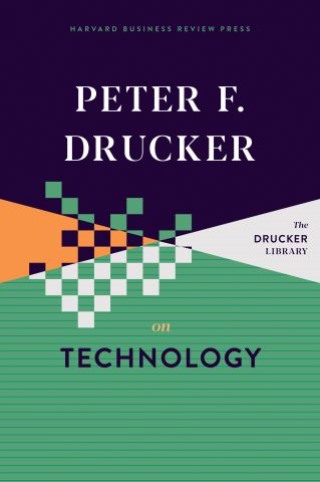 Leading in a Technology-Driven World

The relationship of humans to technology is a ubiquitous theme in today's world of mobile devices, 24/7 internet access, and omnipresent digital business tools. The essays in this collection don't focus on a specific technology but on the challenges technology creates for management. In them Peter F. Drucker explores how managers can harness technology to enable workers to be more productive. In this collection he offers insights on:

Filled with classic, evergreen advice—"Technology is not about tools; it deals with how man works"—Peter F. Drucker on Technology is essential reading for managers in the digital age.

Peter F. Drucker (1909–2005) is one of the best-known and most widely influential thinkers on the subject of management theory and practice, and his writings contributed to the philosophical and practical foundations of the modern corporation.

Often described as "the father of modern management theory," Drucker explored how people are organized across the business, government, and nonprofit sectors of society; he predicted many of the major business developments of the late twentieth century, including privatization and decentralization, the rise of Japan to economic world power, the critical importance of marketing, and the emergence of the information society with its implicit necessity of lifelong learning. In 1959, Drucker coined the term "knowledge worker" and in his later life considered knowledge-worker productivity to be the next frontier of management.

Peter Drucker died on November 11, 2005, in Claremont, California. He had four children and six grandchildren.

You can find more about Peter F. Drucker at cgu.edu/center/the-drucker-institute.