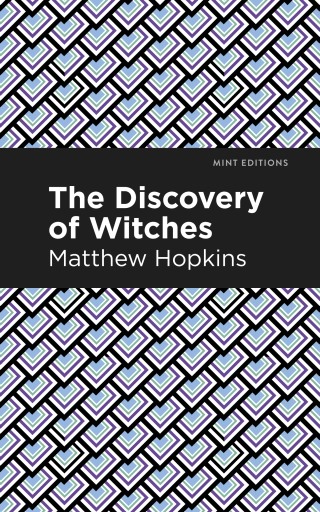 The Discovery of Witches

Starting in the 15th century, a fear of witchcraft and alternative practices grew into a hysteria. Because witches were suspected to be devil worshippers, they were considered heretics to the Christian church. Consequently, the Christians launched a crusade against these women and men. Matthew Hopkins was not only among the greatest supporters of this crusade, but also one of the most active participants. In just over a year, Matthew Hopkins, a self-proclaimed “Witchfinder General”, killed over one hundred people. While the witch hunt hysteria infected much of the 17th century society in England, there were still those who opposed the accusations and discrimination against witches. After being criticized for his work, Hopkins decided to publish a guide to witch hunting, including methods to discover a witch, how to torture them into a confession, and how to prosecute them. Along with outlines of torture methods, such as sleep deprivation and forced physical activity, The Discovery of Witches also addressed the questions and concerns raised by those who did not support Hopkins. Under the guise of being a man of God, Hopkins claimed to have been sent on a divine mission to manipulate other religious groups into joining his cause. As Hopkin’s practices brought him lucrative success, he rose to a short-lived power, but his published doctrine spread his influence for years after his death.

The Discovery of Witches by Matthew Hopkins is a short text of immeasurable insight. Though now recognized as zealot propaganda, The Discovery of Witches depicts a chilling perspective of a heinous time in history, including the concerns of those who opposed it. While Hopkin’s work immortalizes a fascinating yet repulsive historical movement, it also invites readers to reflect on the ways the spirit of his manipulation is still present in modern society.

This edition of The Discovery of Witches by Matthew Hopkins features an eye-catching cover deign and is printed in an easy-to-read font, making it both readable and modern.

Matthew Hopkins(1620-1647) was an English witch hunter. Self-proclaimed as the “Witchfinder General”, Hopkins and his associates were very active during the English Civil War, and fed into the propaganda and panic over witchcraft. Responsible for over one-hundred deaths, it has been figured that Hopkins accounted for about twenty percent of the total executions of English witches spanning from the 15th century to the 18th century. Since he and his partners were only active for fourteen months, that means that Hopkins killed more people than any other witch hunter in one-hundred and sixty years. Hopkins died young, and since the records of his birth and family were lost, he quickly became known as a monstrous figure in folk lore.