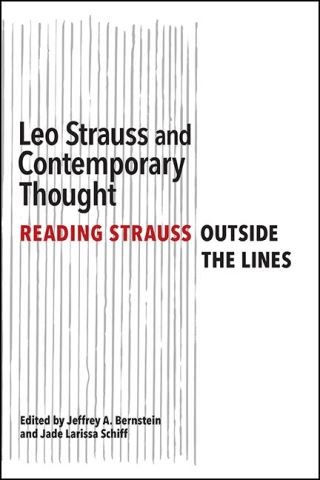 Reading Strauss Outside the Lines

Broadens the horizons of Strauss’s thought by initiating dialogues between him and figures with whom little or no dialogue has yet occurred.

Leo Strauss's readings of historical figures in the philosophical tradition have been justly well explored; however, his relation to contemporary thinkers has not enjoyed the same coverage. In Leo Strauss and Contemporary Thought, an international group of scholars examines the possible conversations between Strauss and figures such as Walter Benjamin, Jacques Derrida, Michel Foucault, Charles Taylor, and Hans Blumenberg. The contributors examine topics including religious liberty, the political function of comedy, law, and the relation between the Ancients and the Moderns, and bring Strauss into many new and original discussions that will be of use to those interested in the thought of Strauss, the history of philosophy and political theory, and contemporary continental thought.

Jeffrey A. Bernstein is Professor of Philosophy at the College of the Holy Cross and the author of Leo Strauss on the Borders of Judaism, Philosophy, and History, also published by SUNY Press. Jade Larissa Schiff is Assistant Professor of Politics at Oberlin College and the author of Burdens of Political Responsibility: Narrative and the Cultivation of Responsiveness.