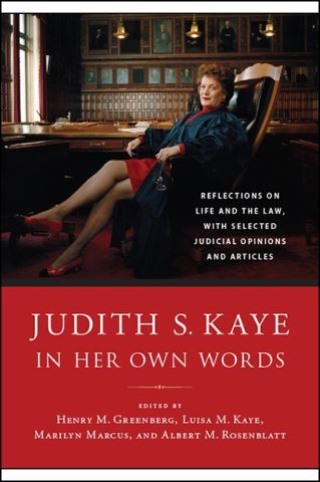 Judith S. Kaye in Her Own Words

Reflections on Life and the Law, with Selected Judicial Opinions and Articles

In 1983, Judith S. Kaye (1938–2016) became the first woman appointed to the Court of Appeals, New York's highest court. Ten years later, she became the first woman to be appointed chief judge of the xourt, and by the time she retired, in 2008, she was the longest-serving chief judge in the court's history. During her long career, she distinguished herself as a lawyer, jurist, reformer, mentor, and colleague, as well as a wife and mother. Bringing together Kaye's own autobiography, completed shortly before her death, as well as selected judicial opinions, articles, and speeches, Judith S. Kaye in Her Own Words makes clear why she left such an enduring mark upon the court, the nation, and all who knew her.

The first section of the book, Kaye's memoir, focuses primarily on her years on the Court of Appeals, the inner workings of the court, and the challenges she faced, as chief judge, in managing a court system populated by hundreds of judges and thousands of employees.

The second section, a carefully chosen selection of her written opinions (and occasional dissents), reveals how she guided the law in New York State for almost a quarter century with uncommon vision and humanity. Her decisions cover every facet of New York and federal law and have often been quoted and followed nationally.

The final section of the book includes selections from her numerous articles and speeches, which cover the field, from common law jurisprudence to commercial law to constitutional analysis, all with an eye to the future and, above all, how the law can best affect the everyday lives of people who come to court—willingly or unwillingly—including, not least, those most in need of the law.

"An extraordinary woman, jurist, and leader who had a striking impact on the law and the administration of justice in New York State and beyond. This collection is more than a simple record of a remarkable life. It is a treasure—not only for those of us who knew and admired Judith but for all who may seek to understand and appreciate the profound impact she had on the law, the legal profession, and the administration of justice." — from the Foreword by Honorable Janet DiFiore

Judith S. Kaye: Henry M. Greenberg is President of the New York State Bar Association and a shareholder with Greenberg Traurig LLP, in Albany, New York. Luisa M. Kaye is Judge Kaye's daughter. After practicing as a commercial litigator in New York for over twenty years, she started a new career, making pastry and baking bread, with plans to open a bakery in Denver, Colorado. Marilyn Marcus is an attorney and the executive director of the Historical Society of the New York Courts since 2004. As executive director, she developed a treasured working and personal relationship with Judge Kaye, who founded the organization in 2002 and remained closely involved with it for the rest of her life. The mission of the Society is to preserve, protect, and promote New York legal history. Albert M. Rosenblatt served with Judge Kaye on the New York State Court of Appeals from 1999 through 2006. His previous books include Opening Statements: Law, Jurisprudence, and the Legacy of Dutch New York (coedited with Julia C. Rosenblatt), also published by SUNY Press.