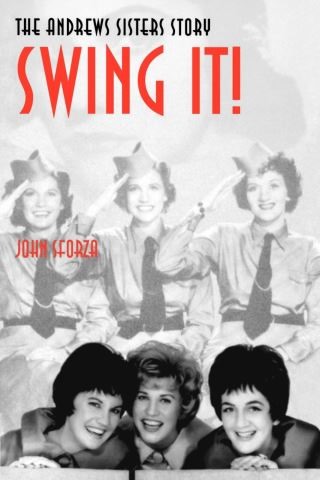 In the years before and after World War II, there were no bigger voices than those of the Andrews Sisters. Maxene, LaVerne, and Patty charted more top ten Billboard hits than Elvis or the Beatles and went on to become the top-selling female vocal group of all time, selling approximately 100 million records. They recorded such instant hits as "Beer Barrel Polka," "Boogie Woogie Bugle Boy," "Don't Fence Me In," and "I Can Dream, Can't I?" They dominated the music scene for fifteen years with some 600 recordings, appearances in seventeen films, cabaret performances, and countless radio and television appearances.

Swing It! is the first published biography of this incredibly popular trio. The book includes many rarely published photos and features extensive career data, including a detailed discography, filmography, and listing of their radio and television appearances between 1938 and 1967. The Andrews Sisters had their big break with the 1937 release of the Yiddish tune "Bei Mir Bist Du Schon (Means that You're Grand)," which sold 350,000 copies in one month and established the trio as successful recording artists. The sisters are now probably best remembered for their work entertaining troops in World War II. They traveled across the U.S. and to Italy and Africa, and their recording of "Boogie Woogie Bugle Boy" for the film Buck Privates became synonymous with the war effort. Part of the reason for the success of the Andrews Sisters was their ability to perform so many different types of music. They repeatedly achieved major hits with melodies derived from many different countries, becoming the first and most prominent artists of their time to bring ethnic-influenced music to the forefront of America's hit parade. The Andrews Sisters separated for two years in the 1950s as the strain of constantly living, working, and playing together for over four decades took its toll. They reunited in 1956 and continued to perform together until LaVerne's death from cancer in 1967.

The Andrews Sisters remain the most successful and enduring female vocal group in the history of show business. Theirs are the voices that defined an era.