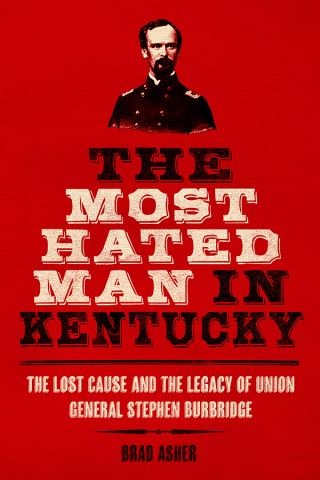 The Most Hated Man in Kentucky

The Lost Cause and the Legacy of Union General Stephen Burbridge

For the last third of the nineteenth century, Union General Stephen Gano Burbridge enjoyed the unenviable distinction of being the most hated man in Kentucky. From mid-1864, just months into his reign as the military commander of the state, until his death in December 1894, the mere mention of his name triggered a firestorm of curses from editorialists and politicians. By the end of Burbridge's tenure, Governor Thomas E. Bramlette concluded that he was an "imbecile commander" whose actions represented nothing but the "blundering of a weak intellect and an overwhelming vanity."

In this revealing biography, Brad Asher explores how Burbridge earned his infamous reputation and adds an important new layer to the ongoing reexamination of Kentucky during and after the Civil War. Asher illuminates how Burbridge—as both a Kentuckian and the local architect of the destruction of slavery—became the scapegoat for white Kentuckians, including many in the Unionist political elite, who were unshakably opposed to emancipation. Beyond successfully recalibrating history's understanding of Burbridge, Asher's biography adds administrative and military context to the state's reaction to emancipation and sheds new light on its postwar pro-Confederacy shift.

Brad Asher: Brad Asher is an independent scholar. He is the author of Beyond the Reservation: Indians, Settlers, and the Law in Washington Territory, 1853–1889. He lives in Louisville, Kentucky.