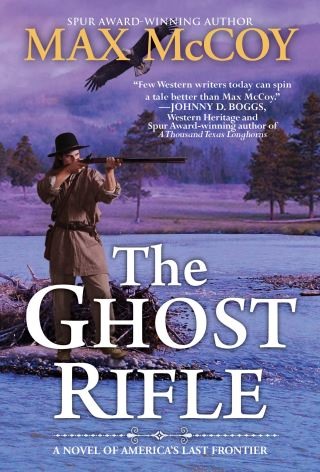 A Novel of America's Last Frontier

Descended from a long line of ramblers and rogues, Jack Picaro came to America to seek his fortune. But after killing his best friend in a drunken duel, the apprentice gunsmith flees westward, leaving behind children he does not know, Gus and April. As Jack ventures up the Missouri River, he finds an unspoiled land where a man can live free—and also be attacked by an Arikara war party. His rifle stolen in the bloody skirmish, Jack sets out alone to reclaim it. His wild escapade ends in a fight to the death with a legendary Crow warrior named Standing Wolf. So begins a fateful epic search across the last frontiers of the untamed West. From the muddy banks of the Mississippi to the shining peaks of the Rockies, Jack Picaro will leave a trail of clues for an abandoned son, Gus, to find him: a famous gunsmith who will make history with a weapon of his own design—and forged a legend that would be passed down for generations. This is the story of . . .

Max McCoy: Max McCoy is an award-winning novelist and veteran crime reporter whose fiction has been called “powerful” by USA Today. His novels have ranged from thrillers to dark westerns to paranormal mysteries, and he's won three Spur awards for best novel from the Western Writers of America. He's also written four original Indiana Jones novels, the novelization of Steven Spielberg's epic miniseries Into the West. A member of Mystery Writers of America, McCoy makes his home at the edge of the rugged Flint Hills of east central Kansas, where he teaches at Emporia State University.