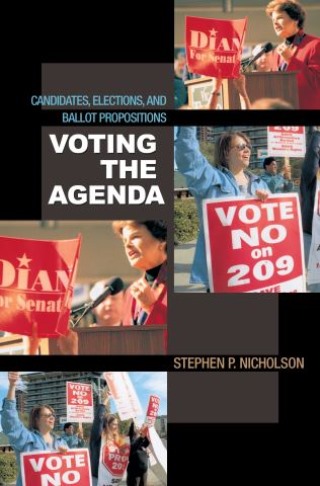 How do voters make decisions in low-information elections? How distinctive are these voting decisions? Traditional approaches to the study of voting and elections often fail to address these questions by ignoring other elections taking place simultaneously. In this groundbreaking book, Stephen Nicholson shows how issue agendas shaped by state ballot propositions prime voting decisions for presidential, gubernatorial, Senate, House, and state legislative races.


As a readily accessible source of information, the issues raised by ballot propositions may have a spillover effect on elections and ultimately define the meaning of myriad contests. Nicholson examines issues that appear on the ballot alongside candidates in the form of direct legislation. Found in all fifty states, but most abundant in those states that feature citizen-initiated ballot propositions, direct legislation represents a large and growing source of agenda issues.


Looking at direct legislation issues such as abortion, taxes, environmental regulation, the nuclear freeze, illegal immigration, and affirmative action, Nicholson finds that these topics shaped voters' choices of candidates even if the issues were not featured in a particular contest or were not relevant to the job responsibilities of a particular office.


He concludes that the agendas established by ballot propositions have a far greater effect in priming voters than is commonly recognized, and indeed, that the strategic use of initiatives and referenda by political elites potentially thwarts the will of the people.