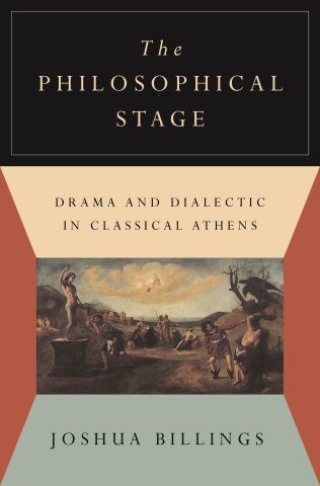 Drama and Dialectic in Classical Athens

The Philosophical Stage offers an innovative approach to ancient Greek literature and thought that places drama at the heart of intellectual history. Drawing on evidence from tragedy and comedy, Joshua Billings shines new light on the development of early Greek philosophy, arguing that drama is our best source for understanding the intellectual culture of classical Athens.

In this incisive book, Billings recasts classical Greek intellectual history as a conversation across discourses and demonstrates the significance of dramatic reflections on widely shared theoretical questions. He argues that neither "literature" nor "philosophy" was a defined category in the fifth century BCE, and develops a method of reading dramatic form as a structured investigation of issues at the heart of the emerging discipline of philosophy.

A breathtaking work of intellectual history by one of today’s most original classical scholars, The Philosophical Stage presents a novel approach to ancient drama and sets a path for a renewed understanding of early Greek thought.

Joshua Billings: Joshua Billings is professor of classics at Princeton University. He is the author of Genealogy of the Tragic: Greek Tragedy and German Philosophy (Princeton), which won the 2015 Society for Classical Studies Charles J. Goodwin Award of Merit.