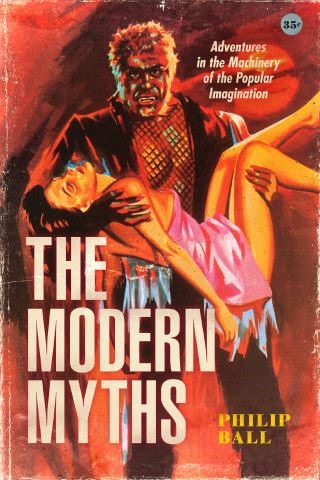 Adventures in the Machinery of the Popular Imagination

"Impressive. . . . Rich in cultural history and imagination. . . . To Ball, mythic writing is where the conditions of irrationality, superstition, and enchantment persist: forms of wonder that depend on the disconnect between what we know for sure and what we simply believe.”—New York Times Book Review

Myths are usually seen as stories from the depths of time—fun and fantastical, but no longer believed by anyone. Yet, as Philip Ball shows, we are still writing them—and still living them—today. From Robinson Crusoe and Frankenstein to Batman, many stories written in the past few centuries are commonly, perhaps glibly, called “modern myths.” But Ball argues that we should take that idea seriously. Our stories of Dracula, Dr. Jekyll and Mr. Hyde, and Sherlock Holmes are doing the kind of cultural work that the ancient myths once did. Through the medium of narratives that all of us know in their basic outline and which have no clear moral or resolution, these modern myths explore some of our deepest fears, dreams, and anxieties. We keep returning to these tales, reinventing them endlessly for new uses. But what are they really about, and why do we need them? What myths are still taking shape today? And what makes a story become a modern myth?

In The Modern Myths, Ball takes us on a wide-ranging tour of our collective imagination, asking what some of its most popular stories reveal about the nature of being human in the modern age.

Philip Ball: Philip Ball is a freelance writer and broadcaster, and was an editor at Nature for more than twenty years. He writes regularly in the scientific and popular media and has written many books on the interactions of the sciences, the arts, and wider culture, including H2O: A Biography of Water, Bright Earth: The Invention of Colour, The Music Instinct, and Curiosity: How Science Became Interested in Everything. His book Critical Mass won the 2005 Aventis Prize for Science Books. Ball is also a presenter of Science Stories, the BBC Radio 4 series on the history of science. He trained as a chemist at the University of Oxford and as a physicist at the University of Bristol. He is the author, most recently, of How to Grow a Human: Adventures in How We Are Made and Who We Are, also published by the University of Chicago Press. He lives in London.