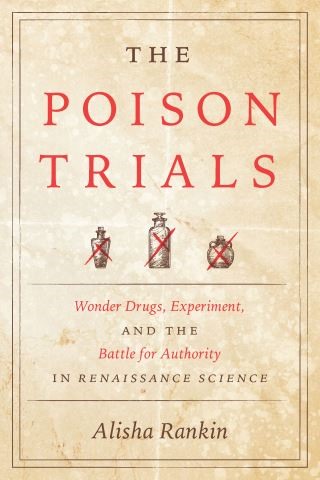 Wonder Drugs, Experiment, and the Battle for Authority in Renaissance Science

In 1524, Pope Clement VII gave two condemned criminals to his physician to test a promising new antidote. After each convict ate a marzipan cake poisoned with deadly aconite, one of them received the antidote, and lived—the other died in agony. In sixteenth-century Europe, this and more than a dozen other accounts of poison trials were committed to writing. Alisha Rankin tells their little-known story.

At a time when poison was widely feared, the urgent need for effective cures provoked intense excitement about new drugs. As doctors created, performed, and evaluated poison trials, they devoted careful attention to method, wrote detailed experimental reports, and engaged with the problem of using human subjects for fatal tests. In reconstructing this history, Rankin reveals how the antidote trials generated extensive engagement with “experimental thinking” long before the great experimental boom of the seventeenth century and investigates how competition with lower-class healers spurred on this trend.

The Poison Trials sheds welcome and timely light on the intertwined nature of medical innovations, professional rivalries, and political power.

Alisha Rankin: Alisha Rankin is associate professor of history at Tufts University. She is coeditor, with Elaine Leong, of Secrets and Knowledge in Medicine and Science, 1500–1800 and author of Panaceia’s Daughters: Noblewomen as Healers in Early Modern Germany, also published by the University of Chicago Press, which won the 2014 Gerald Strauss Prize for Reformation History.