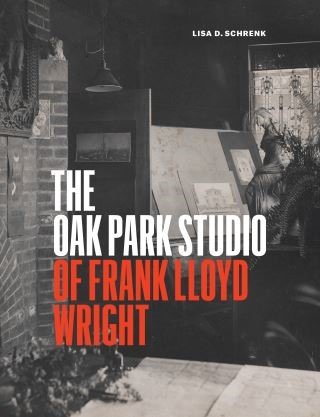 Between 1898 and 1909, Frank Lloyd Wright’s residential studio in the idyllic Chicago suburb of Oak Park served as a nontraditional work setting as he matured into a leader in his field and formulized his iconic design ideology. Here, architectural historian Lisa D. Schrenk breaks the myth of Wright as the lone genius and reveals new insights into his early career.

With a rich narrative voice and meticulous detail, Schrenk tracks the practice’s evolution: addressing how the studio fit into the Chicago-area design scene; identifying other architects working there and their contributions; and exploring how the suburban setting and the nearby presence of Wright’s family influenced office life. Built as an addition to his 1889 shingle-style home, Wright’s studio was a core site for the ideological development of the prairie house, one of the first truly American forms of residential architecture. Schrenk documents the educational atmosphere of Wright’s office in the context of his developing design ideology, revealing three phases as he transitioned from colleague to leader. This heavily illustrated book includes a detailed discussion of the physical changes Wright made to the building and how they informed his architectural thinking and educational practices. Schrenk also addresses the later transformations of the building, including into an art center in the 1930s, its restoration in the 1970s and 80s, and its current use as a historic house museum.

Based on significant original and archival research, including interviews with Wright’s family and others involved in the studio and 180 images, The Oak Park Studio of Frank Lloyd Wright offers the first comprehensive look at the early independent office of one of the world’s most influential architects.

Lisa D. Schrenk: Lisa D. Schrenk is associate professor of architectural history at the University of Arizona. She is the author of Building a Century of Progress: The Architecture of Chicago’s 1933–34 World’s Fair and was the education director of the Frank Lloyd Wright Home and Studio Foundation from 1988 to 1992.