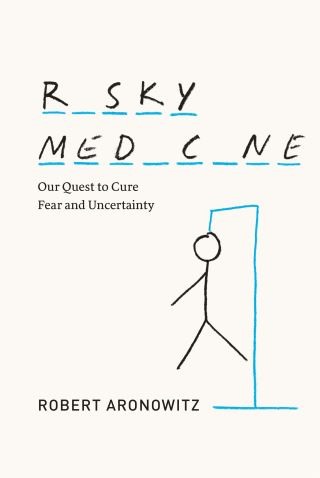 Our Quest to Cure Fear and Uncertainty

Will ever-more sensitive screening tests for cancer lead to longer, better lives?  Will anticipating and trying to prevent the future complications of chronic disease lead to better health?  Not always, says Robert Aronowitz in Risky Medicine. In fact, it often is hurting us.

Exploring the transformation of health care over the last several decades that has led doctors to become more attentive to treating risk than treating symptoms or curing disease, Aronowitz shows how many aspects of the health system and clinical practice are now aimed at risk reduction and risk control. He argues that this transformation has been driven in part by the pharmaceutical industry, which benefits by promoting its products to the larger percentage of the population at risk for a particular illness, rather than the smaller percentage who are actually affected by it. Meanwhile, for those suffering from chronic illness, the experience of risk and disease has been conflated by medical practitioners who focus on anticipatory treatment as much if not more than on relieving suffering caused by disease. Drawing on such controversial examples as HPV vaccines, cancer screening programs, and the cancer survivorship movement, Aronowitz argues that patients and their doctors have come to believe, perilously, that far too many medical interventions are worthwhile because they promise to control our fears and reduce uncertainty.

Risky Medicine is a timely call for a skeptical response to medicine’s obsession with risk, as well as for higher standards of evidence for risk-reducing interventions and a rebalancing of health care to restore an emphasis on the actual curing of and caring for people suffering from disease.

Robert Aronowitz:
Robert Aronowitz is professor and chair of the history and sociology of science at the University of Pennsylvania; he earned his medical degree from Yale University. His books include Making Sense of Illness: Science, Society, and Disease and Unnatural History: Breast Cancer and American Society. He lives in Merion Station, Pennsylvania.