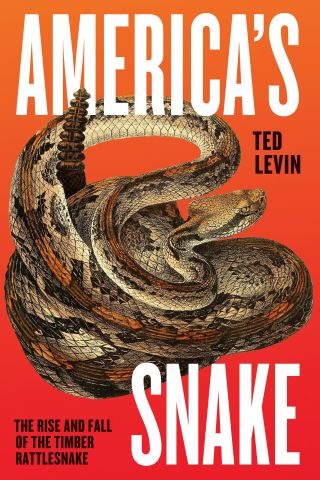 The Rise and Fall of the Timber Rattlesnake

There’s no sound quite like it, or as viscerally terrifying: the ominous rattle of the timber rattlesnake. It’s a chilling shorthand for imminent danger, and a reminder of the countless ways that nature can suddenly snuff us out.

Yet most of us have never seen a timber rattler. Though they’re found in thirty-one states, and near many major cities, in contemporary America timber rattlesnakes are creatures mostly of imagination and innate fear.

Ted Levin aims to change that with America’s Snake, a portrait of the timber rattlesnake, its place in America’s pantheon of creatures and in our own frontier history—and of the heroic efforts to protect it against habitat loss, climate change, and the human tendency to kill what we fear. Taking us from labs where the secrets of the snake’s evolutionary history are being unlocked to far-flung habitats whose locations are fiercely protected by biologists and dedicated amateur herpetologists alike, Levin paints a picture of a fascinating creature: peaceable, social, long-lived, and, despite our phobias, not inclined to bite. The timber rattler emerges here as emblematic of America and also, unfortunately, of the complicated, painful struggles involved in protecting and preserving the natural world.

A wonderful mix of natural history, travel writing, and exemplary journalism, America’s Snake is loaded with remarkable characters—none more so than the snake at its heart: frightening, perhaps; endangered, certainly; and unquestionably unforgettable.

Ted Levin:
A former Bronx Zoo zoologist, Ted Levin is the author of Blood Brook: A Naturalist’s Home Ground, Backtracking: The Way of the Naturalist, and Liquid Land: A Journey through the Everglades, which won the Burroughs Medal in 2004. He has written for Sports Illustrated, Audubon, National Wildlife, National Geographic Traveler, and other publications.