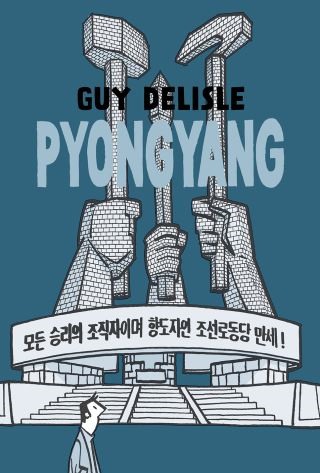 Pyongyang: A Journey in North Korea is Guy Delisle's graphic novel that made his career,an international bestseller for over ten years. Delisle became one of the few Westerners to be allowed access to the fortresslike country when he was working in animation for a French company. While living in the nation's capital for two months on a work visa, Delisle observed everything he was allowed to see of the culture and lives of the few North Koreans he encountered, bringing a sardonic and skeptical perspective on a place rife with propaganda. As a guide to the country, Delisle is a non-believer with a keen eye for the humor and tragedy of dictatorial whims, expressed in looming architecture and tiny, omnipresent photos of the President. The absurd vagaries of everyday life become fodder for a frustrated animator’s musings as boredom and censorship sink in. Delisle himself is the ideal foil for North Korean spin, the grumpy outsider who brought a copy of George Orwell’s 1984 with him into the totalitarian nation. Pyongyang is an informative, personal, and accessible look at a dangerous and enigmatic country. Pyongyang has been translated from the French by Helge Dascher. Dascher has been translating graphic novels from French and German to English for over twenty years. A contributor to Drawn & Quarterly since the early days, her translations include acclaimed titles such as the Aya series by Marguerite Abouet and Clément Oubrerie, Hostage by Guy Delisle, and Beautiful Darkness by Fabien Vehlmann and Kerascoët. With a background in art history and history, she also translates books and exhibitions for museums in North America and Europe. She lives in Montreal.