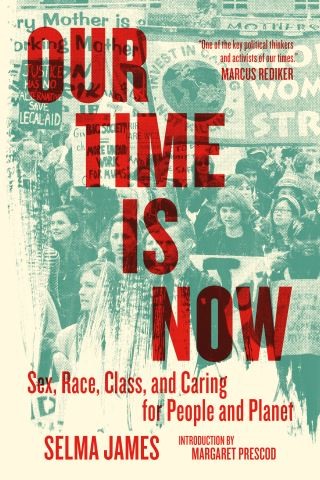 Our Time Is Now

Sex, Race, Class, and Caring for People and Planet

For over sixty years, Selma James has been organizing from the perspective of unwaged women who, with their biological and caring work, reproduce the whole human race—along with whatever other labor they are performing. This work goes on almost unnoticed everywhere on the planet and in every culture. When this work is not economically prioritized, politically protected, or socially supported there are dire consequences for the whole of humanity, beginning with women and children.

This much-anticipated follow-up to her first anthology, Sex, Race, and Class, compiles several decades of James’s work with a focus on her more recent writings, including a groundbreaking analysis of C.L.R. James’s two masterpieces, The Black Jacobins and Beyond a Boundary, and an account of her formative partnership with him over three decades. Her experience with the Caribbean movement for independence and federation is reflected in her introduction to Ujamaa, the extraordinary work of Tanzanians to bypass capitalism, and much more.

Steeped in the tradition of Marx, James draws on half a century of organizing across sectors, struggles and national boundaries with others in the Wages for Housework Campaign and the Global Women’s Strike, an autonomous network of women, men, and other genders that agree with their perspective. There is one continuum between the care and protection of people and of the planet: both must be a priority, beginning with a care income for everyone doing this vital work.

James makes the powerful argument that the climate justice movement can draw on all the movements’ people have formed to refuse their particular exploitation, to destroy the capitalist hierarchy that is destroying the world. Our time is now.

Selma James is a women's rights and antiracist campaigner and author. From 1958 to 1962 she worked with C.L.R. James in the movement for West Indian federation and independence. In 1972 she cofounded the International Wages for Housework Campaign, and in 2000 helped launch the Global Women's Strike whose strategy for change is "Invest in Caring, Not Killing." She coined the word “unwaged,” which has since entered the English language. In the 1970s she was the first spokeswoman of the English Collective of Prostitutes. She is a founding member of the International Jewish Anti-Zionist Network. She coauthored the classic The Power of Women and the Subversion of the Community, which launched the “domestic labour debate.”