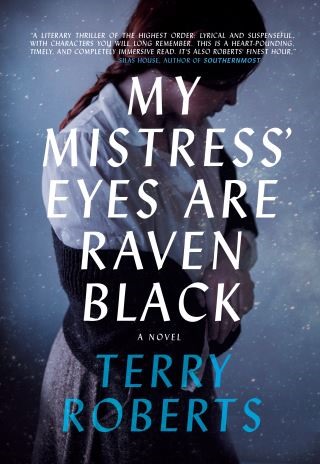 My Mistress' Eyes are Raven Black

New York Harbor's immigration and public health authorities are slowly recovering from the war years when a young, pregnant Irish woman disappears from the Isolation Hospital on Ellis Island.

Stephen Robbins, a specialist in finding missing persons, is assigned the case. Yet when he arrives at the isolation hospital, he discovers an inexplicable string of deaths and disappearances among immigrant patients...and a staff that seems to be hiding a chilling secret. Stephen finds an ally in Lucy Paul, an undercover nurse who is also investigating the mysterious incidents. Together, they begin to unearth a horrifying conspiracy masked beneath the hospital's charitable exterior. As Stephen and Lucy get closer to the truth and each other, they are swept directly into the danger haunting Ellis Island and become the next targets.

Amidst growing racial tensions in the wake of World War I, My Mistress’ Eyes are Raven Black explores the disturbing lengths to which people will go to protect racial purity and condemn those they fear.

Roberts is a lifelong teacher and educational reformer as well as an award-winning novelist. He is a native of the mountains of Western North Carolina—born and bred. His ancestors include six generations of mountain farmers, as well as the bootleggers and preachers who appear in his novels. He was raised close by his grandmother, Belva Anderson Roberts, who was born in 1888 and passed down to him the magic of the past along with the grit and humor of mountain storytelling.

Currently, Roberts is the Director of the National Paideia Center and lives in Asheville, North Carolina with his wife, Lynn.