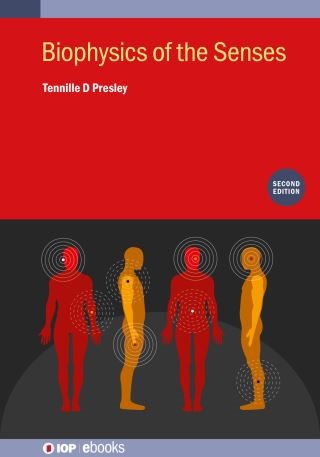 Biophysics of the Senses (Second Edition)

Biophysics of the Senses (Second Edition) connects fundamental properties of physics to biological systems, relating them directly to the human body. It includes discussions of the role of charges and free radicals in disease and homeostasis, how aspects of mechanics impact normal body functions, human bioelectricity and circuitry, forces within the body, and biophysical sensory mechanisms. This is an exciting view of how sensory aspects of biophysics are utilized in everyday life for students who are curious but struggle with the connection between biology and physics.
Updates to the first edition include two new chapters covering the mechanics of sound and hearing and power tools.

Following her PhD, Dr Presley completed her post-doctoral training at Wake Forest University in the Department of Physics and the Translational Science Center. Since joining WSSU in 2010, she has been the recipient of the Research Initiation Program for two years, the Preparing Critical Faculty for the Future Program Grant funded by the National Science Foundation and the Co-Director for the Provost’s Scholars Science Immersion Program. Furthermore, she has been a part of the National Institutes of Health Programs to Increase Diversity Among Individuals Engaged (PRIDE) in Health Related Research division of Functional and Applied Genomics of Blood Disorders. Most recently, Dr Presley was Visiting Faculty at Brookhaven National Laboratory and a recipient of the Buckeyes Under 40 Award. She has published more than a dozen articles in free radical research. Her current research involves investigating the effect of thermodynamics on free radicals and proteins in a state of vascular dysfunction.