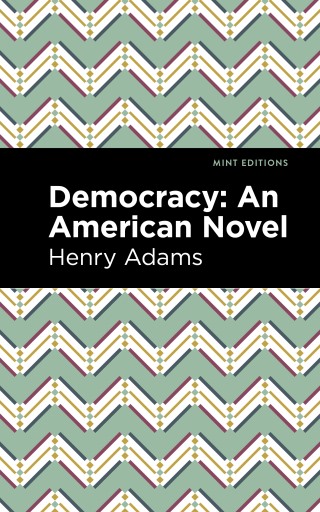 Democracy: An American Novel (1880) is a novel by Henry Adams. Published anonymously, Democracy: An American Novel draws on Adams’ experience as a political journalist in Washington, DC who worked to expose corruption in American government. Although fictional, the novel is viewed as a commentary on the presidential administrations of the 1870s and political atmospheres surrounding each. “For reasons which many persons thought ridiculous, Mrs. Lightfoot Lee decided to pass the winter in Washington. She was in excellent health, but she said that the climate would do her good. In New York she had troops of friends, but she suddenly became eager to see again the very small number of those who lived on the Potomac. It was only to her closest intimates that she honestly acknowledged herself to be tortured by ennui.” Madeleine Lee, a young widow from a prominent clerical family, moves from New York to Washington, DC in search of a better life. There, she hosts a popular salon and draws the attention of several suitors. While John Carrington, an honest man from a working-class background, shows true romantic feelings, Silas P. Ratcliffe, an aspiring politician, proves dangerously attractive. As their competition grows heated, Madeleine begins losing interest in the life of fame and fortune she has pursued for herself. With a beautifully designed cover and professionally typeset manuscript, this edition of Henry Adams’ Democracy: An American Novel is a classic of American literature reimagined for modern readers.

Henry Adams (1838-1918) was an American historian and memoirist. Born in Boston, Adams was the grandson of statesman and lawyer John Quincy Adams on his father’s side. Through his mother, he was related to the Brooks family of wealthy merchants. Adams graduated from Harvard University in 1858 before traveling through Europe on a grand tour. Upon returning in 1860, he attempted to pursue a career in law but soon found himself working as a journalist, first in Boston and then in London, where he was an anonymous correspondent for The New York Times while his father served as the United States Ambassador to the United Kingdom under President Lincoln. In 1868, Adams settled in Washington, DC, where he earned a reputation as a journalist against political corruption. By 1870, he embarked on a brief career as a professor of medieval history at Harvard, a position from which he would retire in 1877 to devote himself to his writing. In addition to his lauded nine-volume History of the United States of America (1801-1817) (1889-1891), Adams wrote the novels Democracy: An American Novel (1880) and Esther (1884). In 1907, his memoir The Education of Henry Adams appeared in print in a small, private edition. A decade later, just after his death at the age of 80, it found wider publication and was awarded a Pulitzer Prize. Recognized as an astute observer of cultural and historical change, Adams remains a controversial figure for his antisemitic views.