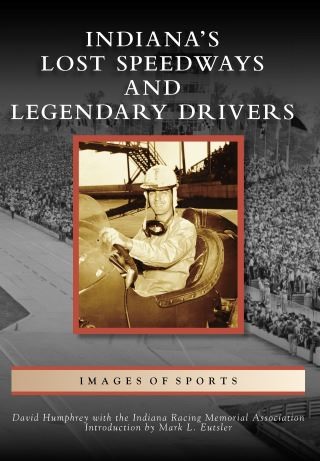 From the Indianapolis 500 Motor Speedway to the dirt oval tracks in small Indiana towns, thousands of Hoosiers frequent the raceway of their choice each year. Today, there are an estimated 40 asphalt, clay, and dirt-covered oval tracks in Indiana where race fans cheer local drivers, often navigating jalopies pieced together from junkyard parts, to victory lane. Though many racetracks remain in operation throughout the state, dozens have fallen to the wayside over the past 100 years. Forever in remembrance are the famous and not so famous Indiana-born drivers who thrilled fans at those now defunct tracks. Evansville native Charlie Wiggins won the Gold and Glory Sweepstakes four times. Bob Kinser from Bloomington raced over 40 years and is an inductee of the National Sprint Car Hall of Fame, and Tom Cherry of Muncie won the Little 500 four times.

David Humphrey: David Humphrey is the author of several books, including Indiana's Lost National Road. He resides in Pendleton, Indiana, with his son, Evan.