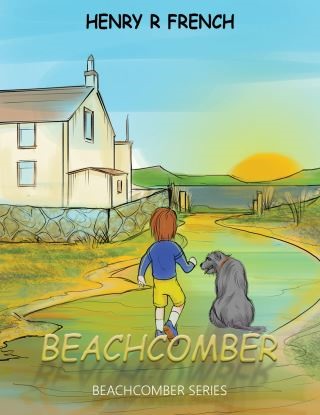 Bored with his afternoon and fed up with his big brother, ten-year-old Jake hopes to clear his head with a short walk from his home on the northwest English coast to the beach.
His trail is a familiar one, taking him down the track behind his family’s coastal cottage, then a scramble through the grassy sand dunes to the scruffy but beautiful beach, where the sound of the waves and the clear sea air soon sweep away all Jake’s frustrations.
His adventure takes a strange turn, however, as Jake and his trusty Irish wolfhound, Peggy, stumble on a scary find, which would shock the bravest of explorers but would certainly make all his schoolfriends sit up and take notice. Before he can tell anyone of his find, Jake is challenged by some bigger boys who unwittingly threaten disaster, unless of course, Jake can stop them…

Henry R French: Born in 1961, Henry R French is the fifth of seven children. After a happy childhood in a crowded South London home, he trained as a car mechanic. He moved to Leamington Spa and learned how to design cars. He’s since had careers as a barman, a chartered engineer, a motoring journalist and, most recently, a learning mentor.
Having raised his own family, he’s never forgotten fond family times, many inspiring his creative writing. After many years developing his craft as a hobby, Beachcomber, his first foray as a professional children’s author, starts an adventure series for young readers.