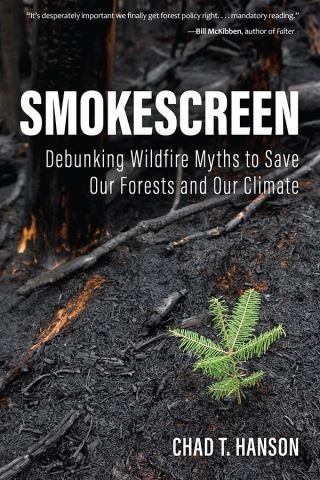 Debunking Wildfire Myths to Save Our Forests and Our Climate

Smokescreen cuts through years of misunderstanding and misdirection to make an impassioned, evidence-based argument for a new era of forest management for the sake of the planet and the human race. Natural fires are as essential as sun and rain in fire-adapted forests, but as humans encroach on wild spaces, fear, arrogance, and greed have shaped the way that people view these regenerative events and given rise to misinformation that threatens whole ecosystems as well as humanity's chances of overcoming the climate crisis.

Scientist and activist Chad T. Hanson explains how natural alarm over wildfire has been marshaled to advance corporate and political agendas, notably those of the logging industry. He also shows that, in stark contrast to the fear-driven narrative around these events, contemporary research has demonstrated that forests in the United States, North America, and around the world have a significant deficit of fire. Forest fires, including the largest ones, can create extraordinarily important and rich wildlife habitats as long as they are not subjected to postfire logging. Smokescreen confronts the devastating cost of current policies and practices head-on and ultimately offers a hopeful vision and practical suggestions for the future—one in which both communities and the climate are protected and fires are understood as a natural and necessary force.

Chad T. Hanson: Chad T. Hanson is a research ecologist and the director of the John Muir Project of Earth Island Institute. He is coeditor of The Ecological Importance of Mixed-Severity Fires: Nature’s Phoenix and his work has been featured in the International Journal of Wildland Fire, Ecosphere, and BioScience. He lives in Big Bear City, California.