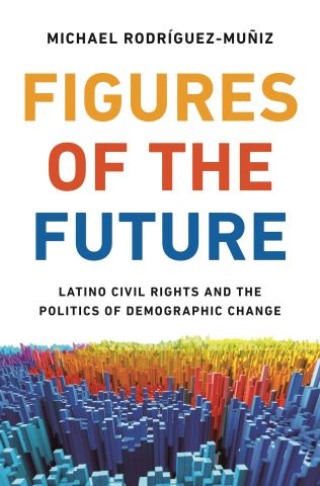 Figures of the Future

Latino Civil Rights and the Politics of Demographic Change

An in-depth look at how U.S. Latino advocacy groups are using ethnoracial demographic projections to bring about political change in the present

For years, newspaper headlines, partisan speeches, academic research, and even comedy routines have communicated that the United States is undergoing a profound demographic transformation—one that will purportedly change the “face” of the country in a matter of decades. But the so-called browning of America, sociologist Michael Rodríguez-Muñiz contends, has less to do with the complexion of growing populations than with past and present struggles shaping how demographic trends are popularly imagined and experienced. Offering an original and timely window into these struggles, Figures of the Future explores the population politics of national Latino civil rights groups.

Based on eight years of ethnographic and qualitative research, spanning both the Obama and Trump administrations, this book investigates how several of the most prominent of these organizations—including UnidosUS (formerly NCLR), the League of United Latin American Citizens, and Voto Latino—have mobilized demographic data about the Latino population in dogged pursuit of political recognition and influence. In census promotions, get-out-the-vote campaigns, and policy advocacy, this knowledge has been infused with meaning, variously serving as future-oriented sources of inspiration, emblems for identification, and weapons for contestation. At the same time, Rodríguez-Muñiz considers why these political actors have struggled to translate this demographic growth into tangible political gain and how concerns about white backlash have affected how they forecast demographic futures.

Figures of the Future looks closely at the politics surrounding ethnoracial demographic changes and their rising influence in U.S. public debate and discourse.