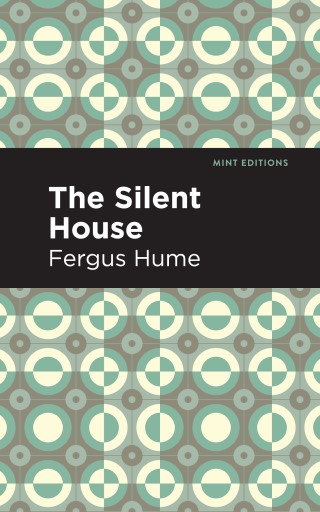 The Silent House (1899) is a mystery novel by Fergus Hume. Although not as successful as The Mystery of a Hansom Cab (1886), an immediate bestseller for Hume, The Silent House is a gripping novel with an atmospheric intensity and tightly wound mystery worthy of the best of Victorian fiction. From an author whose work inspired Arthur Conan Doyle, The Silent House is a story of murder with a haunting, original conclusion.

At twenty-five, Lucian Denzil is at the very beginning of his career as a barrister. Settling into a serious life, he rents a modest home in Pimlico on Geneva Square. Although he endeavors to focus and live only for his work, Lucian cannot help but notice the stories told by neighbors and servants about No. 13, a home near his own on the square. Decades prior to his settling in Pimlico, No. 13, now known as “the silent house,” was the site of a gruesome murder. Over the years, it had gone unoccupied and fallen into general disrepair. In 1895, a quiet, reclusive man named Mark Berwin moved into the home, where he lived alone, and to which he could not infrequently be seen returning in the dead of night in a drunken, disturbed state. One night, while walking through Geneva Square to his own home, Lucian encounters Berwin who, intoxicated and confused, requires the young man’s assistance. Helping the older gentleman make his way to No. 13, Lucian feels a growing unease, a sense of something that will lead him not only to the heart of a local mystery, but into the depths of the silent house itself.

With a beautifully designed cover and professionally typeset manuscript, this edition of Fergus Hume’s The Silent House is a classic of English mystery and detective fiction reimagined for modern readers.

Fergus Hume (1859-1932) was an English novelist. Born in Worcestershire, Hume was the son of a civil servant of Scottish descent. At the age of three, he moved with his family to Dunedin, New Zealand, where he attended Otago Boy’s High School. In 1885, after graduating from the University of Otago with a degree in law, Hume was admitted to the New Zealand bar. He moved to Melbourne, Australia, where he worked as a clerk and embarked on his career as a writer with a series of plays. After struggling in vain to find success as a playwright, Hume turned to novels with The Mystery of a Hansom Cab (1886), a story of mystery and urban poverty that eventually became one of the most successful works of fiction of the Victorian era. Hume, who returned to England in 1888, would go on to publish over 100 novels and stories, earning a reputation as a leading writer of popular fiction and inspiring such figures as Arthur Conan Doyle, whose early detective novels were modeled after Hume’s. Despite the resounding success of his debut work of fiction, Hume died in relative obscurity at a modest cottage in Thundersley.