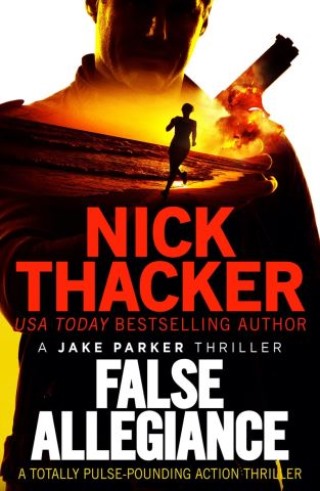 Someone wants Jake Parker dead. He’ll find out why, or die trying…

Ex-army, ex-police, widowed husband, estranged son. Jake Parker has no family, no one to care if one of the government-contract jobs he takes goes wrong. So he’s shocked to get a phone call from his father as he’s pursuing an anomaly from his latest mission. But his dad isn’t calling for a chat, he’s issuing a warning: stop digging around, let this job go.

Jake barely has time to register the news that his father has been keeping tabs on him before a bomb tears apart his apartment, and he barely escapes with his life. Now he’s injured, on the run, and determined to find out who wants to silence him, and why.

The more he digs, the more drastic the attempts on his life become, but Jake won’t be beaten at this game. When he gets hold of one of the thugs trying to take him out, Jake learns that he’s treading on the toes of an illicit arms deal and now he may be the only person who can stop a cargo of weapons getting into the hands of international terrorists. Terrorists with their eyes on the US and who seem to have a hold on his father. Now Jake has to make the ultimate choice: allegiance to his family, or to his country…? He can only save one.

A completely gripping thriller from a USA Today bestselling author. A pulse-pounding read for fans of David Baldacci, Tim Tigner and the Jack Ryan thrillers.

“There are thrillers and there are THRILLERS… I actually had to lay this down a few times so I could catch my breath.” Goodreads reviewer, 5 stars

“A page-turner that I literally couldn’t tear myself away from… A cross between Dan Brown and James Rollins with short chapters that connect many moving parts to ultimately culminate in a breathless climax.” Goodreads reviewer, 5 stars

“One of the best thrillers I’ve read… The pace never slows… A page-turner from beginning to end.” Goodreads reviewer, 5 stars

“Fast-paced and punchy… filled with action with a race against time… moves like lightning and the end is a shocker!” Goodreads reviewer, 5 stars

“Fast-paced, action-packed, thought-provoking, in a (HOLY CRAP WHAT IF THAT HAPPENED!!!) kind of way, and a great, great read.” Goodreads reviewer, 5 stars

“I couldn’t put this book down. Had me hooked from the first page…