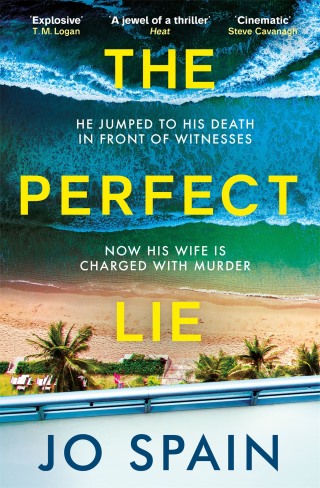 
He jumped to his death in front of witnesses. Now his wife is charged with murder.

Five years ago, Erin Kennedy moved to New York following a family tragedy. She now lives happily with her detective husband in the scenic seaside town of Newport, Long Island. When Erin answers the door to Danny's police colleagues one morning, it's the start of an ordinary day. But behind her, Danny walks to the window of their fourth-floor apartment and jumps to his death.

Eighteen months later, Erin is in court, charged with her husband's murder. Over that year and a half, Erin has learned things about Danny she could never have imagined. She thought he was perfect. She thought their life was perfect.

But it was all built on the perfect lie.

'Superbly written, cinematic and pacy!' STEVE CAVANAGH
'Domestic noir at its best' M. T. EDVARDSSON
'Grabs you by the throat' LIZ NUGENT
'A top-notch thriller' T. M. LOGAN
'Chilling and all too plausible' JAMES OSWALD
'I loved this book and it deserves to fly to the top of the charts' ELLY GRIFFITHS
'A sure-fire smash hit!' CAZ FREAR
'The Perfect Lie will pin you to your seat until you reach the last page' JANE CASEY
'So good you won't want it to end' DAILY MAIL
'A jewel of a thriller' HEAT
'With so many "oh my gosh" moments, this will have you absolutely gripped' PRIMA
'Be warned: this book will keep you up all night!' CLOSER

Jo Spain: Jo Spain is a full-time writer and screenwriter. Her first novel, With Our Blessing, was one of seven books shortlisted in the Richard and Judy Search for a Bestseller competition and her first psychological thriller, The Confession, was a number one bestseller in Ireland. Jo co-wrote the ground-breaking television series Taken Down, which first broadcast in Ireland in 2018. She's now working on multiple European television projects. Jo lives in Dublin with her husband and their four young children.