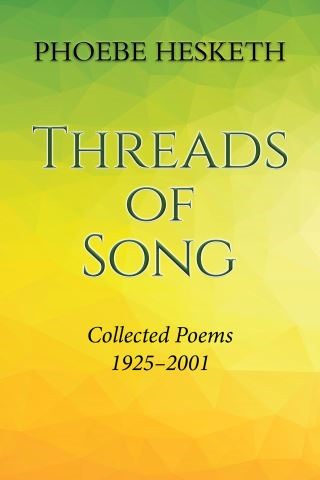 ‘Poetry is a painting in the mind –
Without palette and brush
it mixes words into images.’
PHOEBE HESKETH
This commemorative collection of poems by Phoebe Hesketh has been selected by her son, Martin Hesketh. The collection includes poems from the twelve volumes and collections of her poetry that were published during her lifetime, her poems for younger children and 38 late poems not published previously.
Although she started her career as a poet comparatively late in life, Phoebe Hesketh had shown great facility with verse from a young age, winning a prestigious poetry prize while still in her teens. Writing in a deceptively simple idiom, she gained many admirers over the years for the combination of intellectual rigour and emotional honesty found in her work and, in particular, for her precise and powerfully evocative descriptions of the natural world.
‘Phoebe Hesketh is one of England’s strongest and most genuine poets.’ANNE STEVENSON

Phoebe Hesketh: Phoebe Hesketh was the eldest daughter of the pioneer radiologist A.E. Rayner and his wife, Gertrude who was an accomplished violinist. She was born in Preston in 1909. The previously unpublished poem ‘Return to Ribblesdale Place’ (p. 182) is a wistful recollection of her birthplace. She was educated at Cheltenham Ladies College. She married in 1931, had three children, and for many years lived with her family in the small Lancashire village she wrote about in her prose books Rivington (1972) and Village of the Mountain Ash (1990). She died in 2005. At a junior school for girls in Southport, she discovered she had a knack for writing poetry. Thanks to her English teacher, words became a fascination, leaping into scansion and rhyme. For her they were evocative and, when imaginatively related to each other, assumed a quality akin to that of magic: making poetry out of prose. This fascination continued throughout her career, as is clear in ‘Words’ (p. 106) Her Petrarchan sonnet, the first poem in Part Two, ‘Poems for Younger Readers’, won the Cheltenham Ladies’ College poetry prize in 1925. She left school soon afterwards to nurse her sick mother. After her mother’s death in 1928, and for the next twenty-three years she wrote little poetry, apart from her first volume Poems, published in 1939 and dismissed later as ‘juvenile’. Nevertheless, her delightful rhythmic poem ‘Who and Why’ is included in Part 2 of this collection (p. 161). Before her marriage, she walked frequently in the north Lancashire countryside and moorland with which she identified herself with much feeling. Her poem ‘Northern Stone’ (p. 25) declares ‘All these are my lifestream, scoured and thinned.’ During the Second World War she was appointed part-time editor of the Bolton Evening News Women’s page. Her brief was to write ‘simple, clear prose – no fine writing – which has something to say and says it in words well chosen, apt and pared to the minimum’. These instructions later underpinned the flair, fluency and concise nature of her poetry. Her career as a poet began in 1945 with her collaboration with the poet Herbert Palmer. His insistence on uncomplicated diction led to the simplicity and directness of her lyric poetry, making it all the more potent and surprising. Lean Forward Spring, published in 1948, was followed by nine volumes and three collections before the publication of her last volume A Box of Silver Birch in 1997. She was awarded the Greenwood prize for poetry in 1948 and 1967. She followed no fashion, though her imagery and themes have a contemporary quality. Her poetry, a match between sound and sense, is original and lyrical. It is the outcome of restless, but intellectual argument and a determination to make words work without descending into irritable obscurities. Her originality lay in her ability to use accepted forms and subject matter to shine new light on whatever she wanted to express. She had little time for poetry that was written, as she would say, ‘from the top of the head’, rather than ‘from the heart’. At the end of her career she wrote: ‘I am that unfortunate thing, a lyric poet. Oh, hard to cut out the tongue of a natural bard and leave it all to the brain.’ In 1956 she was elected a Fellow of the Royal Society of Literature. In 1990, in recognition of her significant contribution to poetry, she was elected a Fellow of the University of Central Lancashire.