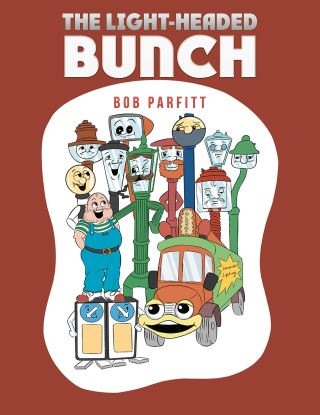 Bob and Colonel Gaslight work closely with the Mayor of Lampwick, sorting out the day-to-day work and solving any problems in Lampwick.
Throughout their adventures, each of the Light-Headed Bunch – Spot, Teach, Mac, Slinky, Left and Righty to name a few – will use their own special powers, from catching criminals and strange fantasy
happenings in Lampwick to saving Christmas, with a little magic from Colonel Gaslight.

Bob Parfitt: Bob was born in Meir, Stoke-on-Trent, in 1953. After leaving the school, he went to work for Wedgwood Pottery in Barlaston where he worked in the silk screen printing department. Much later, he worked in the Royal Tunbridge Wells, Kent, where he worked as a public lighting attendant before moving to Bexhill-on-Sea, East Sussex, where he now lives with his lovely wife Denise and their Chihuahua dog Koko and continues to write his adventure stories, The Light-Headed Bunch.