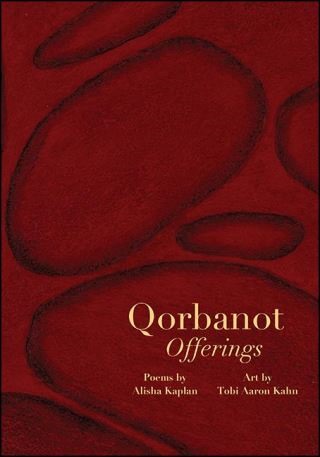 A dynamic dialogue of poetry and art that reimagines the ancient, biblical concept of sacrifice.

A collaboration between poet Alisha Kaplan and artist Tobi Aaron Kahn, Qorbanot—the Hebrew word for “sacrificial offerings”—explores the concept of sacrifice, offering a new vision of an ancient practice. A dynamic dialogue of text and image, the book is a poetic and visual exegesis on Leviticus, a visceral and psychological exploration of ritual offerings, and a conversation about how notions of sacrifice continue to resonate in the twenty-first century.

Both from Holocaust survivor families, Kaplan and Kahn deal extensively with the Holocaust in their work. Here, the modes of poetry and art express the complexity of belief, the reverberations of trauma, and the significance of ritual. In the poems, the speaker, offspring of burnt offerings, searches for meaning in her grandparents’ experiences and in the long tradition of Orthodox Judaism in which she was raised. Kahn’s paintings on handmade paper, drawn from decades of his career as an artist, have not previously been exhibited or published. They reflect his quest to distill a legacy of trauma and loss into enduring memory.

With a foreword by James E. Young and essays by Ezra Cappell, Lori Hope Lefkovitz, and Sasha Pimentel, the book presents new directions for thinking about what sacrifice means in religious, social, and personal contexts, and harkens back to foundational traditions, challenging them in reimagined and artistic ways.

Alisha Kaplan is a poet who lives in Toronto, Canada. This is her first book. Tobi Aaron Kahn is a painter, sculptor, and Professor of Fine Arts at the School of Visual Arts. His art is the subject of several books, including Objects of the Spirit: Ritual and the Art of Tobi Kahn, by Emily Bilski. He lives in New York City.