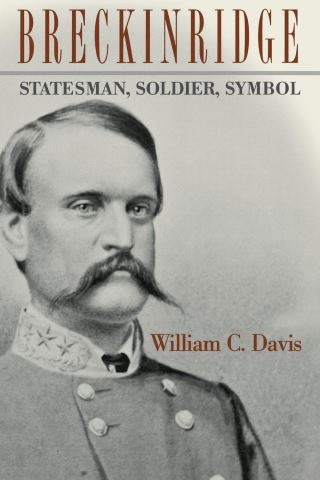 John C. Breckinridge rose to prominence during one of the most turbulent times in our nation's history. Widely respected, even by his enemies, for his dedication to moderate liberalism, Breckinridge's charisma and integrity led to his election as Vice President at age 35, the youngest ever in America's history.

After a decade of being out-of-print, Breckinridge: Statesman, Soldier, Symbol returns as the quintessential biography of one of Kentucky's great moderates. Historian William C. Davis sheds light on Breckinridge's life throughout three key periods, spanning his career as a celebrated statesman, heroic soldier, and proponent of the reconciliation.

A true Kentucky hero, "Old Breck's" bravery in battle, dedication to the pursuit of truth, and unique ability to win the loyalty of others rank him alongside Henry Clay and Simon Kenton. Drawing from a remarkable collection of sources, including previously unknown documents and letters, as well as the papers of his associates and extensive aid from the Breckinridge family, Davis presents the legacy of a man often overlooked.

William C. Davis: William C. Davis is director of programs at the Virginia Center for Civil War Studies. He is the author or editor of more than fifty books, including The Pirates Laffite: The Treacherous World of the Corsairs of the Gulf. He was also the chief consultant for The History Channel's Civil War Journal and is professor of history at Virginia Tech.