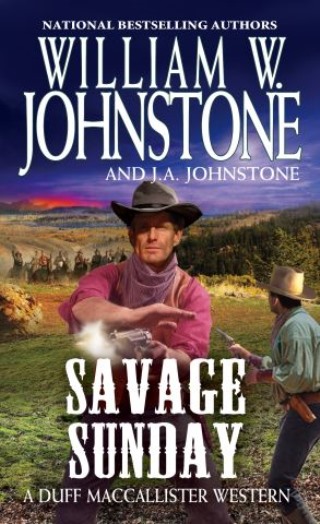 Scottish cattleman Duff MacCallister staked a claim for his life in America—and reserves a righteous anger for those who break the law in this smoking six-gun shootout from National Bestselling Authors William W. and J.A. Johnstone . . .

Thanks to a new line, the railroad has come to Chugwater, Wyoming, bridging the gap between the small town and the larger city of Cheyenne. Now Duff MacCallister can transport his 250 Black Angus cattle herd with ease by Iron Horse instead of enduring a two-day traildrive. But the day after depositing $15,000 in his Cheyenne account, Duff learns that bank president Jeremy Brinks embezzled every cent—totalling $65,000—and then guilt-ridden, committed suicide.

Jeremy wasn’t just Duff’s banker, but his longtime friend. The widow Brinks doesn’t believe her husband was a thief or that he killed himself. Duff agrees. And after getting an appointment as Territorial Marshal, he’s aiming his barrel at putting every double-crossing lawman, red-handed outlaw, and corrupt businessmen he can rustle up behind bars—or six feet under . . .

William W. Johnstone:
William W. Johnstone is the New York Times and USA Today bestselling author of over 300 books, including the series THE MOUNTAIN MAN; PREACHER, THE FIRST MOUNTAIN MAN; MACCALLISTER; LUKE JENSEN, BOUNTY HUNTER; FLINTLOCK; THOSE JENSEN BOYS; THE FRONTIERSMAN; THE LEGEND OF PERLEY GATES, THE CHUCKWAGON TRAIL, FIRESTICK, SAWBONES, and WILL TANNER: DEPUTY U.S. MARSHAL. His thrillers include BLACK FRIDAY, TYRANNY, STAND YOUR GROUND, THE DOOMSDAY BUNKER, and TRIGGER WARNING. Visit his website at www.williamjohnstone.net or email him at dogcia2006@aol.com.
|||
Being the all-around assistant, typist, researcher, and fact checker to one of the most popular western authors of all time, J.A. Johnstone learned from the master, Uncle William W. Johnstone.

“Every day with Bill was an adventure story in itself. Bill taught me all he could about the art of storytelling. ‘Keep the historical facts accurate,’ he would say. ‘Remember the readers, and as your grandfather once told me, I am telling you now: be the best J.A. Johnstone you can be.’”