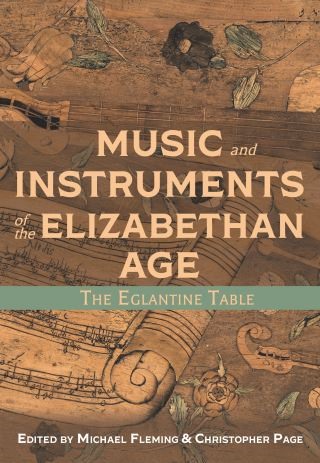 Music and Instruments of the Elizabethan Age

The reign of Elizabeth I (1558-1603) has often been regarded as the Golden Age of English music. Many works of high quality, both vocal and instrumental, were composed and performed by native and immigrant musicians, while balladry and minstrelsy flourished in hall, street and alehouse.

No single source of the sixteenth century presents this rich musical culture more vividly than the inlaid surface of the Eglantine Table. This astonishing piece of furniture was made in the late 1560s for the family of Elizabeth or 'Bess' of Hardwick, Countess of Shrewsbury (1527-1608). The upper surface bears a wealth of marquetry that depicts, amidst the briar roses and other plants, numerous Elizabethan musical instruments in exquisite detail together with open books or scrolls of music with legible notation. Given that depictions of musical instruments and musical sources are rare in all artistic media of the Elizabethan period, the Eglantine Table is a very important resource for understanding the musical life of the age and its connection to aspects of culture now treated separately in disciplines such as art history, social and political history or the study of material culture.

This volume assembles a group of leading scholars in the history of instruments and associated fields to ground future research upon the most expert assessment of the depicted instruments, the music and the decorative imagery that is currently attainable. A final section of the book takes a broad view, placing the Table and the musical components of its decoration in relation to the full range of Elizabethan musical life.

MICHAEL FLEMING focused his instrument-making career principally on viols and was awarded a PhD by the Open University in 2001 for his research into English viol-making. Since 2005 he has produced the leading international journal of organology, The Galpin Society Journal, and he was Chair of the Viola da Gamba Society from 1997-2017. His recent publications include Early English Viols: Instruments, Makers and Music (Routledge, 2017), co-authored with John Bryan.
CHRISTOPHER PAGE is Emeritus Professor of English in the University of Cambridge, a Fellow of the British Academy and a Member of the Academia Europaea. His most recent publications include the second in his four-volume history of the early guitar, The Guitar in Stuart England: A Social and Musical History, was published by Cambridge University Press in November 2017.