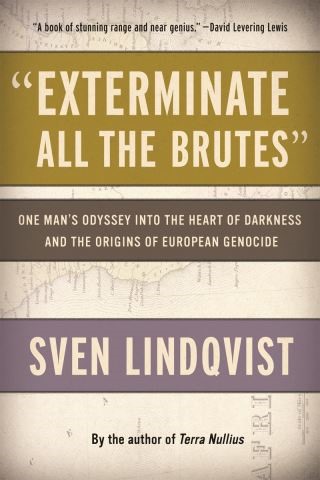 "Exterminate All the Brutes"

Now part of the eponymous HBO docuseries written and directed by Raoul Peck, “Exterminate All the Brutes” is a brilliant intellectual history of Europe’s genocidal colonization of Africa—and the terrible myths and lies that it spawned

“A book of stunning range and near genius. . . . The catastrophic consequences of European imperialism are made palpable in the personal progress of the author, a late-twentieth-century pilgrim in Africa. Lindqvist’s astonishing connections across time and cultures, combined with a marvelous economy of prose, leave the reader appalled, reflective, and grateful.” —David Levering Lewis

“Exterminate All the Brutes,” Sven Lindqvist’s widely acclaimed masterpiece, is a searching examination of Europe’s dark history in Africa and the origins of genocide. Using Joseph Conrad’s Heart of Darkness as his point of departure, the award-winning Swedish author takes us on a haunting tour through the colonial past, interwoven with a modern-day travelogue. Retracing the steps of European explorers, missionaries, politicians, and historians in Africa from the late eighteenth century onward, “Exterminate All the Brutes” exposes the roots of genocide in Africa through Lindqvist’s own journey through the Saharan desert. As he shows, fantasies not merely of white superiority but of actual extermination—“cleansing” the earth of the so-called lesser races—deeply informed the colonialism and racist ideology that ultimately culminated in Europe’s own Holocaust.

Conquerors’ stories are the ones that inform the self-mythology of the West—whereas the lives and stories of those displaced, enslaved, or killed are too often ignored and forgotten. “Exterminate All the Brutes” forces a crucial reckoning with a past that still echoes in our collective psyche—a reckoning that compels us to acknowledge the exploitation and brutality at the heart of our modern, globalized society. As Adam Hochschild has written, “Lindqvist’s work leaves you changed.”

Sven Lindqvist was the author of more than thirty books, including "Exterminate All the Brutes," The Skull Measurer's Mistake, A History of Bombing, Terra Nullius, and The Dead Do Not Die (all published by The New Press). A resident of Stockholm, he held a PhD in the history of literature from Stockholm University, an honorary doctorate from Uppsala University, and an honorary professorship from the Swedish government.