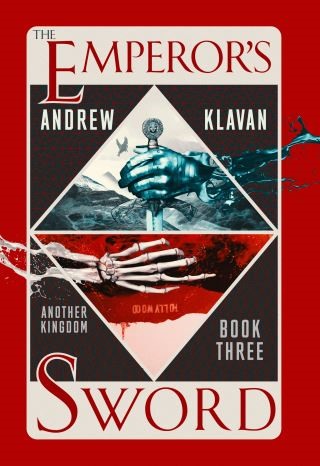 "The Emperor's Sword is a wildly entertaining adventure of overlapping worlds and titanic clashes between fundamentals of good and evil. Klavan's world-building is both amazing and all too plausible." —Joseph Finder, New York Times bestselling author of Paranoia and House on Fire

"Part swashbuckler, part fantasy, part Romance (in the old sense), part comedy, and part acidulous commentary on The Way We Live Now, The Emperor’s Sword brings Andrew Klavan’s trilogy to a resounding conclusion. I guarantee this: you won’t be bored." —John Wilson, aka “The Man Who Reads Books”

Having survived the Nightmare Feast, Austin Lively is living the dream. He has returned to Hollywood and his movie career is in full swing. His new script, Another Kingdom, has been unexpectedly purchased by a top producer at an enormous price. Beautiful women flock to his bed, movie stars court his attention, and the powers-that-be are predicting stardom. His only problems: a recurring vision of a magical landscape he can’t quite remember, and a giant mouse who seems to be following him—a giant mouse with a woman’s face. After his beloved Jane Janeway is accused of murder, Austin begins to realize that this dream he’s living is a nightmare in disguise. He is caught in the coils of a terrible magic, and the only way he can save his soul is to give up his success, re-enter the Eleven Lands, and find the Emperor Anastasius so he can restore Queen Elinda to her throne. But when he arrives at the emperor’s encampment, he is shocked to find Anastasius dead. With a weird hitman on his trail in Los Angeles, he must break Jane out of prison before a murder plot takes her life. In the Eleven Lands, he must follow the Emperor into hell itself where he will face the most shocking revelation of all.

Andrew Klavan: Andrew Klavan is the author of such internationally bestselling crime novels as True Crime, filmed by Clint Eastwood, Don’t Say A Word, filmed starring Michael Douglas as well as Empire of Lies and Werewolf Cop. He has been nominated for the Mystery Writers of America’s Edgar Award five times and has won twice. He wrote the screenplays to “A Shock to The System,” which starred Michael Caine, and “One Missed Call,” which starred Edward Burns. His political satire videos have been viewed by tens of millions of people, and he currently does a popular podcast The Andrew Klavan Show at the Daily Wire.