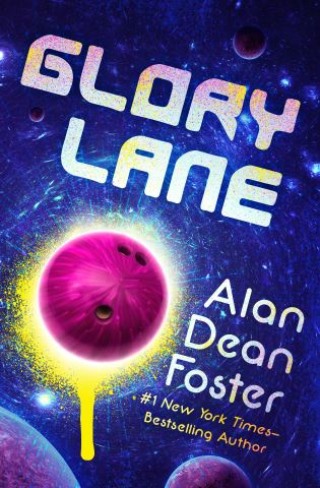 A mind-blowing cosmic adventure from the #1 New York Times–bestselling author of the Adventures of Pip & Flinx.

It’s just another boring late night in Albuquerque, New Mexico, for Seeth, a disillusioned punk rocker with too much time on his hands and too little money. That is, until he heads to a bowling alley and runs into Kerwin, a geeky graduate student who’s there doing research for a sociology assignment. While trying to distract Kerwin from his scholarly pursuits, Seeth notices two burly cops trying to unlawfully arrest a lone bowler, and for laughs, he jumps in to save him.

When it turns out the bowler, the cops, and even the bowling ball are all different races of aliens involved in an interstellar chase, Seeth and Kerwin find themselves on a ship careening through space—protecting a mysterious, all-powerful lifeform that might possibly be the most valuable thing in the universe.

Seeth’s found the excitement he wanted. And he didn’t even have to leave Albuquerque—just Earth.

“One of the most consistently inventive and fertile writers of science-fiction and fantasy.” —The Times (London)

“Foster knows how to spin a yarn.” —Starlog

“Alan Dean Foster is the modern day Renaissance writer, as his abilities seem to have no genre boundaries.” —Bookbrowser

The New York Times–bestselling author of more than one hundred ten books, Alan Dean Foster is one of the most prominent writers of modern science fiction. Born in New York City in 1946, he studied filmmaking at UCLA, but first found success in 1968 when a horror magazine published one of his short stories. In 1972 he wrote his first novel, The Tar-Aiym Krang, the first in his Pip and Flinx series featuring the Humanx Commonwealth, a universe he has explored in more than twenty-five books. He also created the Spellsinger series, numerous film novelizations, and the story for Star Trek: The Motion Picture. An avid world traveler, he lives with his family in Prescott, Arizona.