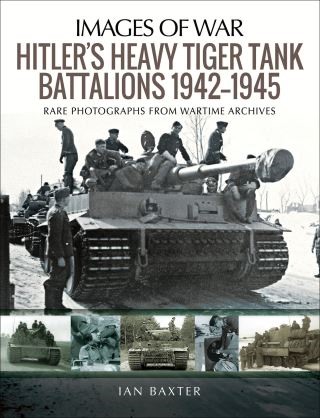 The heavy tanks and other armored vehicles of WWII Germany come vividly to life in this informative volume of detailed wartime photos.

Between 1942 and 1945, heavy tank battalions saw action on the Eastern Front, Italy and North West Europe before being pushed back to Berlin for the final defensive battles. This volume features graphic photographs and descriptions of vehicles on operations in all these theatres. Modelers and equipment buffs in particular will find this Images of War book extremely useful and fascinating.

Ian Baxter:
Ian Baxter is an avid collector of WW2 photographs. His previous books in this Series include Hitler’s Boy Soldiers, Nazi Concentration Camp Commandants and German Army on the Eastern Front – The Advance, German Army on the Eastern Front – The Retreat and Nazi Concentration Camp Commandants, The Crushing of Army Group (North) and the SS Waffen Division series including SS Leibstandarte Division and SS Totenkopf Division At War. He lives near Chelmsford, Essex.