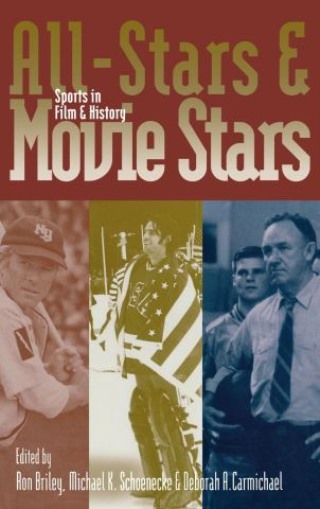 Sports in Film and History

Sports films are popular forms of entertainment around the world, but beyond simply amusing audiences, they also reveal much about class, race, gender, sexuality, and national identity. In All-Stars and Movie Stars, Ron Briley, Michael K. Schoenecke, and Deborah A. Carmichael explore the interplay between sports films and critical aspects of our culture, examining them as both historical artifacts and building blocks of ideologies, values, and stereotypes.

The book covers not only Hollywood hits such as Field of Dreams and Miracle but also documentaries such as The Journey of the African American Athlete and international cinema, such as the German film The Miracle of Bern. The book also explores television coverage of sports, commenting on the relationship of media to golf and offering a new perspective on the culture and politics behind the depictions of the world's most popular pastimes.

The first part of the book addresses how sports films represent the cultural events, patterns, and movements of the times in which they were set, as well as the effect of the media and athletic industry on the athletes themselves. Latham Hunter examines how the baseball classic The Natural reflects traditional ideas about gender, heroism, and nation, and Harper Cossar addresses how the production methods used in televised golf affect viewers. The second section deals with issues such as the growth of women's involvement in athletics, sexual preference in the sports world, and the ever-present question of race by looking at sports classics such as Rocky, Hoosiers, and A League of Their Own.

Finally, the authors address the historical and present-day role sports play in the international and political arena by examining such films as Visions of Eight and The Loneliness of the Long Distance Runner. This important and unique collection illuminates the prominent role that sports play in society and how that role is reflected in film. Analysis of the depiction of sports in film and television provides a deeper understanding of the appeal that sports hold for people worldwide and of the forces behind the historic and cultural traditions linked to sports.