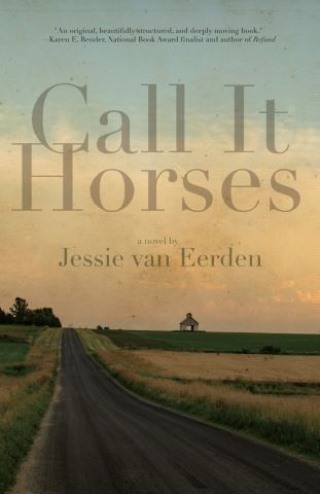 Winner of the 2019 Dzanc Prize for Fiction
Set in small-town West Virginia in the twilight of the eighties, Call It Horses tells the story of three women—niece, aunt, and stowaway—and an improbable road trip.

Frankie is an orphan (or a reluctant wife). Mave is an autodidact (or the town pariah). Nan is an artist (or the town whore). Each separately haunted, Frankie, Mave, and Nan—with a hound in tow—set out in an Oldsmobile Royale for Abiquiú and the desert of Georgia O’Keeffe, seeking an escape from everything they’ve known.

Frankie records the journey in letters to her aunt Mave’s dead lover, a linguist named Ruth, sketching out her troubled life and her complicated relationship with Mave, who became her guardian when Frankie was orphaned at sixteen. Slowly, one letter at a time, Frankie exposes the ruins of herself and her fellow passengers: things that chase them, that died too soon, that never lived.

With lush prose and brutal empathy, Frankie tells Ruth—and herself—the story of liminality experienced by a woman standing just outside of motherhood, fulfillment, and love.

Jessie van Eerden: Jessie van Eerden is author of three novels: Glorybound, winner of the Foreword Editor’s Choice Fiction Prize; My Radio Radio; and Call It Horses, winner of the Dzanc Books Prize for Fiction. Her portrait essay collection The Long Weeping won the Foreword INDIES Book of the Year Award, and her work has appeared in Best American Spiritual Writing, Oxford American, New England Review, and other venues. Jessie has been awarded the Gulf Coast Prize in Nonfiction, the Milton Fellowship, and a Mid Atlantic Arts Foundation Fellowship. She holds an MFA in nonfiction from the University of Iowa and teaches at Hollins University.