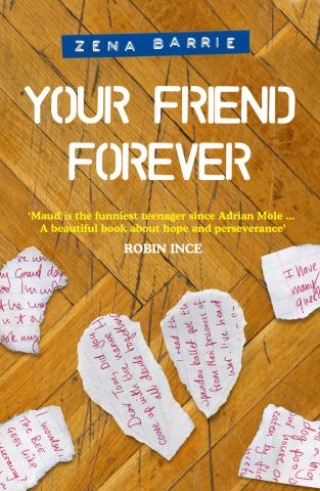 Preston, 1981. Maud, who is twelve and lives with her dysfunctional parents and her elder brother, spends a lot of her time in her bedroom writing letters to her favourite popstar, Tom Harding, the lead singer of a punk band called Horsefly.

No one really understands her or tries to – and she thinks Tom just might have some answers to her many, many questions...

Zena Barrie: Zena Barrie lives in Manchester and runs the Greater Manchester Fringe and the Camden Fringe. She ran the Kings Arms pub and Theatre in Salford for a while and also the Etcetera Theatre in Camden, as well as working in a wide variety of roles at the Edinburgh Fringe (from street performer to venue manager). In the 90's she did a degree in Drama and Theatre Arts specialising in playwriting. Up until recently she has been co-hosting the award winning spoken word night Verbose. She is also one half of performance art duo The Sweet Clowns. Your Friend Forever is her first novel.