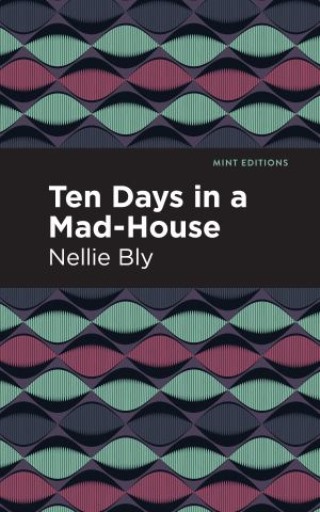 Ten Days in a Mad House

Ten Days in a Mad-House (1887) is a book by American investigative journalist Nellie Bly. For her first assignment for Joseph Pulitzer’s famed New York World newspaper, Bly went undercover as a patient at a notorious insane asylum on Blackwell’s Island. Spending ten days there, she recorded the abuses and neglect she witnessed, turning her research into a sensational two-part story for the New York World later published as Ten Days in a Mad-House.

Checking into a New York boardinghouse under a false identity, Bly began acting in a disturbed, unsettling manner, prompting the police to be summoned. In a courtroom the next morning, she claimed to be suffering from amnesia, leading to her diagnosis as insane from several doctors. Sent to the Women’s Lunatic Asylum, Bly spent ten days witnessing and experiencing rampant abuse and neglect. There, she noticed that many of the patients, who were constantly beaten and belittled by violent nurses and staff members, seemed perfectly sane or showed signs of having their conditions severely worsened during their time at the asylum. Served spoiled food, forced to live in squalor, and given ice-cold baths by unsympathetic attendants, the patients she met during her stay seemed as though abandoned by a city that had sent them there for the supposed purpose of healing. Showcasing her skill as a reporter and true pioneer of investigative journalism, Bly published her story to a captivated and inspired audience, setting in motion a process of reform that would change the city’s approach to its asylums for the better.

With a beautifully designed cover and professionally typeset manuscript, this edition of Nellie Bly’s Ten Days in a Mad-House is a classic work of American investigative journalism reimagined for modern readers.

Nellie Bly (1864-1922) was an American investigative journalist. Born Elizabeth Jane Cochran in a suburb of Pittsburgh, Pennsylvania, she was raised in a family of Irish immigrants. In 1879, she attended Indiana Normal School for a year before returning to Pittsburgh, where she began writing anonymously for the Pittsburgh Dispatch. Impressed by her work, the newspaper’s editor offered her a full-time job. Writing under the pseudonym of Nellie Bly, she produced a series of groundbreaking investigative pieces on women factory workers before traveling to Mexico as a foreign correspondent, which led her to report on the arrest of a prominent Mexican journalist and dissident. Returning to America under threat of arrest, she soon left the Pittsburgh Dispatch to undertake a dangerous investigative assignment for Joseph Pulitzer’s New York World on the Women’s Lunatic Asylum on Blackwell’s Island. After feigning a bout of psychosis in order to get admitted, she spent ten days at the asylum witnessing widespread abuse and neglect. Her two-part series in the New York World later became the book Ten Days in a Mad-House (1887), earning Bly her reputation as a pioneering reporter and leading to widespread reform. The following year, Bly took an assignment aimed at recreating the journey described in Jules Verne’s Around the World in Eighty Days (1873). Boarding a steamer in Hoboken, she began a seventy-two day trip around the globe, setting off a popular trend that would be emulated by countless adventurers over the next several decades. After publishing her book on the journey, Around the World in Seventy-Two Days (1890), Bly married manufacturer Robert Seaman, whose death in 1904 left Bly in charge of the Iron Clad Manufacturing Co. Despite Bly’s best efforts as a manager and inventor, her tenure ultimately resulted in the company’s bankruptcy. In the final years of her life, she continued working as a reporter covering World War I and the women’s suffrage movement, cementing her legacy as a groundbreaking and ambitious figure in American journalism.