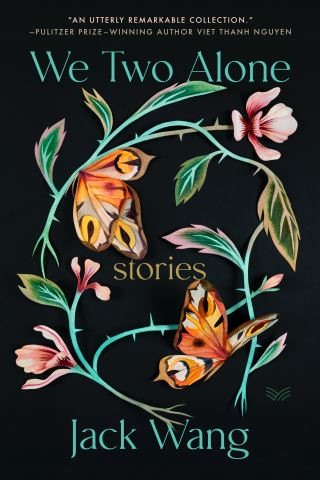 Praised as “utterly remarkable” and “deeply resonant” by Pulitzer Prize-winning authors Viet Thanh Nguyen and Robert Olen Butler, a bold and brilliant debut collection, in the vein of The Refugees, which dramatizes the Chinese diaspora across the globe over the past hundred years.

Set on five continents and spanning decades, We Two Alone traces the arc and evolution of the Chinese immigrant experience. A young laundry boy risks his life, pretending to be a girl to play organized hockey in Canada in the 1920s. A Canadian couple is caught when Shanghai succumbs to violence during the Second Sino-Japanese War. A family sttempts to buy a home in South Africa in the early years of apartheid. An actor in New York struggles to keep his career alive while yearning to reconcile with his estranged wife.

From the vulnerable and disenfranchised to the educated and privileged, the characters in this extraordinary collection embody the diversity of the Chinese diaspora past and present. In these deeply affecting stories, Jack Wang subverts expectations as he captures the hope, pain, and sacrifices of the millions who journey into the unknown to create better lives, and explores the shifting boundaries of morality, the intimacies and failings of love, and the choices circumstances force us to make.

Jack Wang received a B.Sc. from the University of Toronto, an M.F.A. from the University of Arizona, and a Ph.D. in English with an emphasis in creative writing from Florida State University. For the 2014 academic year, he held the David T. K. Wong Creative Writing Fellowship at the University of East Anglia in Norwich, England. His work has appeared in Prism International, the Malahat Review, the New Quarterly, the Humber Literary Review, and Joyland. Originally from Vancouver, Wang is an associate professor in the Department of Writing at Ithaca College in Ithaca, New York, where he lives with his wife, the novelist Angelina Mirabella, and their two daughters.