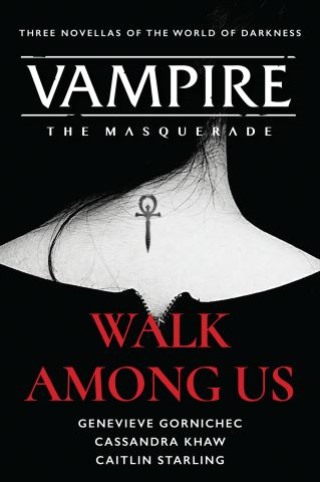 One of the most popular role-playing properties in the world gets new life with this trio of horror novellas set in Vampire: The Masquerade's World of Darkness by three brilliant talents: Genevieve Gornichec, Cassandra Khaw, and Caitlin Starling

The subtle horror and infernal politics of the World of Darkness are shown in a new light in Vampire: The Masquerade: Walk Among Us, an audio-first collection of three novellas that show the terror, hunger, and power of the Kindred as you've never seen them before.

In Genevieve Gornichec's A SHEEP AMONG WOLVES, performed by Erika Ishii, depression and radicalization go hand-in-hand as a young woman finds companionship in the darkness...

In Cassandra Khaw's FINE PRINT, performed by Neil Kaplan, an arrogant tech bro learns the importance of reading the fine print in the contract for immortality...

And in Caitlin Starling's THE LAND OF MILK AND HONEY, performed by Xe Sands, ideals and ethics bump heads with appetite on a blood farm.

Three very different stories from three amazing, distinct voices, but all with one thing in common: the hunger never stops, and for someone to experience power, many others are going to have to feel pain.

Cassandra Khaw is a scriptwriter at Ubisoft Montreal. Her fiction has been nominated for the Locus Award and the British Fantasy Award, and her game writing has won a German Game Award. You can find her short stories in places like F&SF, Lightspeed, and Tor.com. Her novella Nothing But Blackened Teeth is coming out from Nightfire, the new Tor horror imprint in 2021.

Genevieve Gornichec may have tried to major in Vikings when she was in college, but she's always had a special place in her heart for vampires. Originally from Cleveland, Ohio, she now lives even deeper in the Midwest with her partner, several reptiles, and a very grumpy cat. Her full-length debut novel, The Witch's Heart, releases in early 2021.

|||Caitlin Starling is a writer and spreadsheet-wrangler who lives near Portland, Oregon. Equipped with an anthropology degree and an unhealthy interest in the dark and macabre, she writes horror-tinged speculative fiction of all flavors. The Luminous Dead is her first novel.