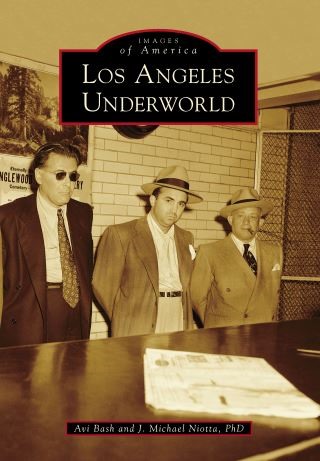 From the blackhanders and bootleggers of the early 20th century to political corruption and the rise and eventual toppling of a Mafia family, the history of organized crime in Los Angeles visually chronicled within this work possesses the same level of intrigue, glamour, and murder as the films that made the City of Angels iconic. Los Angeles Underworld showcases an extraordinary collection of rare and previously unpublished images pulled directly from family photo albums and top secret police files.

Avi Bash: Avi Bash is an organized crime historian and researcher who has curated one of the largest and most recognized collections of organized crime photographs and artifacts. Parts of his collection have been displayed at multiple museums and exhibitions across the county. He is also the author of Organized Crime in Miami, a photographic book within this same series chronicling the history of organized crime in South Florida.|||Dr. J. Michael Niotta, PhD, specializes in Los Angeles. The great-grandson and biographer of Los Angeles godfather Jack Dragna, he has lectured at the Las Vegas Mob Museum, appeared on the Travel Channel and Nat Geo, and authored two nonfiction titles. The National Crime Syndicate features his column Early Days of Los Angeles. Present projects include a Dragna biography and an extensive history of California crime with Richard Warner.