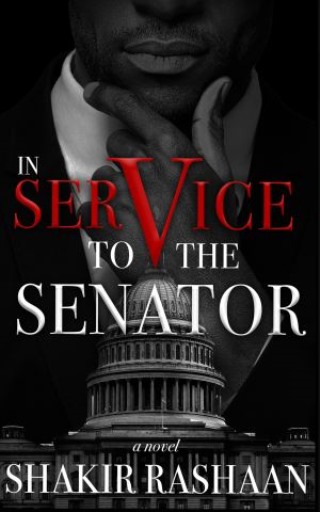 In Service to the Senator

Terrell Warren is a rising star within the ranks of the Democratic Party. Buoyed his former heroic exploits in Desert Storm, the two-term senator has ascended quickly, currently being vetted as a part of the party’s presidential ticket in the upcoming election cycle, entering rarified air as an African-American politician. He’s charismatic, devilishly handsome, and possesses both the pedigree and the type of bipartisan support that could have him sitting in the Oval Office as Commander-in-Chief in the near future.

Even his unconventional marriage to the stunning Kianna Warren doesn’t seem to sway the public, as rumors from media circuits continue to swirl around their alternative proclivities. After all, who wouldn’t want to surrender and be in service to the powerful, irresistible statesman? He has managed to claim the American public’s imagination, providing the catalyst as the face of the wave of the future of the party.

Unfortunately, there are forces at work that wish to derail the inevitable, and they will stop at nothing to ensure that Senator Warren is discredited.

Kianna’s unexpected abduction takes him off the campaign trail, as the mysterious organization taking credit for her abduction has made one rather extraordinary demand—one that threatens to revert American foreign policy back to the previous century’s “Cold War” history. The ultimatum is clear—either comply with the demands, or his wife will be killed.

In Service to the Senator is the latest explosive tale from best-selling author Shakir Rashaan, where a race against the clock might mean the difference between life and death.

Shakir Rashaan: National Bestselling Author, Shakir Rashaan, has been “corrupting minds, one book at a time” for the past ten-plus years, contributing to two New York Times bestselling anthologies, and best known for his provocative, twisted tales that introduce readers to worlds and topics they’ve never encountered before. He is best known for his signature series, The Nubian Underworld, In Service to the Senator, and Love, Lust & Beautiful Liars and is currently developing projects in the YA paranormal genre. While conferring with characters, new and old, inside of his “NEBU Universe,” he can be found binge-watching series on Netflix or Hulu. Find out more at www.ShakirRashaan.com, on Facebook @AuthorShakirRashaan, Instagram @shakirrashaan, Twitter @shakirrashaan, and TikTok @shakirrashaan.