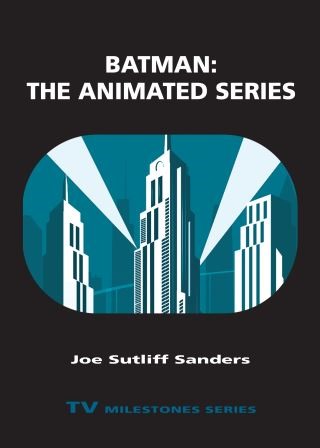 It’s possible that no other version of Batman has been more influential than the one that debuted as a children’s cartoon in 1992. For millions of fans around the world, the voices of Batman and the Joker introduced in Batman: The Animated Series (BTAS) remain the default. The characters, designs, and major themes of the show went on to shape other cartoons, films, and bestselling video games. In this study, Joe Sutliff Sanders argues that BTAS is not only a milestone of television but a milestone in the public persona of one of the most recognizable characters in the world. The series introduced a new generation to Batman and provided the foundation for a family of cartoons that expanded the superhero universe. It introduced or reinvented major characters including Mr. Freeze, Robin, the Joker, and Harley Quinn. In three chapters, Sanders pursues the intricate arguments that still energize BTAS. Chapter 1 explores the visuals of the show, the artistic histories and tensions that inform its revolutionary style, and what ideas—intentional and otherwise—its aesthetic implies. Chapter 2 turns to the task of defining a "good" wealthy person against a backdrop of "bad," getting to the heart of one of Batman’s most problematic characteristics. Lastly, chapter 3 considers Harley Quinn, a character who emblemizes much of what made BTAS successful. From her first appearance, Harley has been both sexy and witty, victor and victim, and this chapter explains the duality that defines her. Since its debut in 1992, BTAS has garnered multiple awards, launched or developed the careers of countless important artists, and created aesthetic styles—in terms of both visuals and voice acting—that continue to resonate. Sanders’s book follows an informative and exciting path through the material and is designed to be accessible to aficionados as well as relative newcomers. Batman fans, popular culture enthusiasts, and media studies scholars will find within these pages insights and ironies to provoke endless conversations.