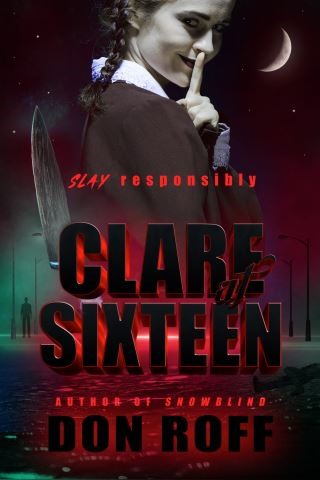 If Dexter and Faith (from Buffy the Vampire Slayer) had a daughter and raised her in the land of Santa Clarita Diet....she'd be Clare Bleecker.

The small town of Pickman Flats offers a bright sunny place filled with quaint shopping and wine tasting. But underneath the town's inviting exterior lies a dark underbelly, a sinister element that lurks in the shadows.

Clare is a devoted vegan who goes to Catholic high school, is fastidious in her manner, and also, well, a serial killer. The Other Clare takes over at the most inopportune of times. She tries to keep her inner beast's lust for blood at bay, but it's hard when there are so many creeps around who help to unleash it.

What secret lies hidden beneath Pickman Flats? And who is Clare really?

If you want answers, well, there's only one way to find out - even if it kills you.

""A stylish, cool, ratatattat machine gun prose that blazes from all chambers -- it's like an unholy union of Heathers and Dexter. Clare Bleecker is an unforgettable, dangerous voice." -- Tom Holland, writer-director of Fright Night and Child's Play

"Clare at Sixteen is a terrifying triumph! What Don Roff has done with this highly personal and deeply disturbing novel is deliver one of the most memorable and ultimately sympathetic serial killers since Robert Bloch conceived of Norman Bates. This bloody and brilliant book, as well as its complex main character, will haunt readers long after their final prayers of the night. BRAVO!" -- Mark Pavia, Writer/Director of Stephen King's The Night Flier

"Reminiscent of Heathers, Clare at Sixteen is a delightfully dark teen horror comedy with a dauntless and snarky heroine who serves up her own unique brand of small town justice along with some killer vegan smoothie recipes." --S.G. Browne, author of Breathers and Less Than Hero

Don Roff: Don Roff is no stranger to scary and suspenseful fiction. Over the past 12 years, his terrifying yarns have been published under the Scholastic banner with titles like Scary Stories, Werewolf Tales, Dragon Adventures, and Terrifying Tales.

In adult fiction, he has written two bestselling works—Zombies: A Record of the Year of Infection, published by Chronicle Books/Simon & Schuster UK, as well as the supernatural thriller, Snowblind, published by Brambleberry Books. Snowblind, a chilling story about four Army Rangers snowbound in a haunted lodge, is currently in development as a major motion picture starring Karl Urban (Thor: Ragnarok, Star Trek), Ashley Greene (Twilight), and Forrest Goodluck (The Revenant). In addition, his darkly humorous YA novel, Claire At 16, was published in 2021 with The Parliament House.

Don Roff's fans decribe Snowbound as "a harrowing paranormal thriller that will, at times, simply creep out the most hardened horror reader,""not to be missed," "brilliant, "a completely riveting book," "a great read," with "a stunning, explosive and somewhat unexpected conclusion."

Fans of Clare at Sixteen dig in to the "Dexter meets Buffy...twisted backstory" that is "a mashup of ALL of my favorite things with "inner dialogue that had me chuckling and the plot [that] had me guessing,"

His suspense radio series Darkside Drive, on CJSW 90.9 FM radio (now available on iTunes), has completed its second season. He also writes a popular monthly "Monster in the House" screenwriting blog for the Save the Cat website based on Blake Snyder's ubiquitous, blockbuster book.

A former US Army Ranger, Don resides in the Pacific Northwest. Read more at www.donvroff.com and like Don Roff at: www.facebook.com/Author.Don.Roff