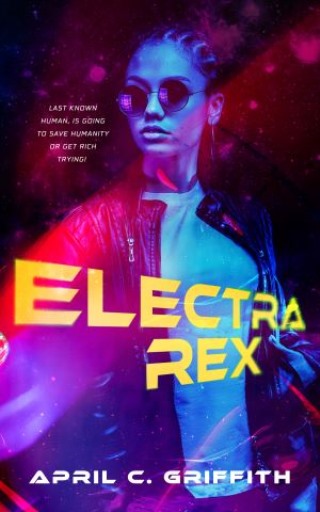 Electra Rex, self-appointed &#8216;galaxy's greatest starship captain' and last known human, is going to save humanity or get rich trying!

Electra Rex, the last human in known space, is broke—worse than broke, deeply in debt and out of options. After a desperate, drunken attempt to fix her faltering life, she finds herself in a deeper hole after stealing the most stylish starship she's ever seen, but it comes with a massive lien.

She's left with a fast ship, a nearly indestructible debt-enforcement robot named Letterman watching her every move and a lead on a lucrative job with the mysterious organization known as Bi-MARP, which is set to rebuild Earth on the two-thousand-year anniversary of its destruction.

Across two galaxies, she struggles to stay one step ahead of space pirates and creditors, all while trying to catch the eye of a beautiful, vivacious bisexual clone named Treasure, who was recently rescued from a top-secret university lab run by academic squids.

She succeeds in seducing Treasure—or perhaps it's the other way around—while they run scams to find earthling relics like the original formula for Coca-Cola, a 1968 Volkswagen Beatle, a mostly complete Monopoly board game and a largely accurate, if not small and green, clone of an elephant. All the while, Electra has to hide the fact that Treasure is actually the most valuable item on the Bi-MARP list—a fertile human female.

When the truth of humanity's demise and the goals of Bi-MARP are uncovered, Electra, the galaxy's foremost transgender hero, decides that the riches and fame aren't worth the sacrifices, and she turns on her former employer to rescue Treasure a third time, completing her search for money, what it means to be human without the rest of humanity and, most of all, love.

April C. Griffith: April Griffith is a lesbian, a rogue academic, and a giant nerd. She’s from Oregon, but calls San Diego her home. Her passions include LGBTQ+ political activism, creating safe places for women in Dungeons & Dragons, and writing the books she wanted to read when she was a kid.