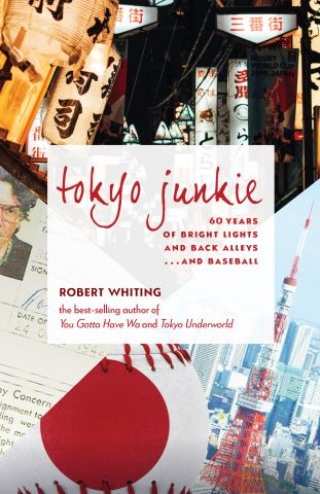 60 Years of Bright Lights and Back Alleys . . . and Baseball

Tokyo Junkie is a memoir that plays out over the dramatic 60-year growth of the megacity Tokyo, once a dark, fetid backwater and now the most populous, sophisticated, and safe urban capital in the world.

Follow author Robert Whiting (The Chrysanthemum and the Bat, You Gotta Have Wa, Tokyo Underworld) as he watches Tokyo transform during the 1964 Olympics, rubs shoulders with the Yakuza and comes face to face with the city’s dark underbelly, interviews Japan’s baseball elite after publishing his first best-selling book on the subject, and learns how politics and sports collide to produce a cultural landscape unlike any other, even as a new Olympics is postponed and the COVID virus ravages the nation.

A colorful social history of what Anthony Bourdain dubbed, “the greatest city in the world,” Tokyo Junkie is a revealing account by an accomplished journalist who witnessed it all firsthand and, in the process, had his own dramatic personal transformation.

Robert Whiting is a journalist and author who has lived in Tokyo on and off for more than half a century. One of only a few Western writers to have a regular newspaper column in Japanese, he is the author of several highly successful books on Japan including the best-selling You Gotta Have Wa (on baseball in Japan) and Tokyo Underworld (currently under option to Legendary Global). Topics he has written on include sports, Tokyo nightlife, and crime.