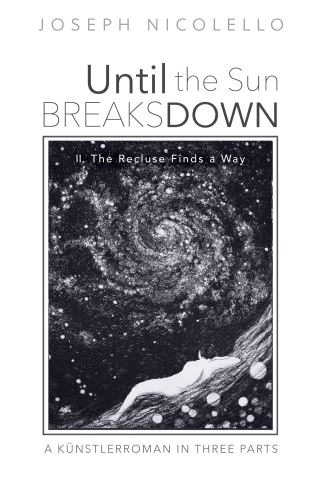 Until the Sun Breaks Down: A Künstlerroman in Three Parts

II. The Recluse Finds a Way

Written when the author was in his early and mid-twenties, Until the Sun Breaks Down is a contemporary American Kunstlerroman modeled on Dante's Divine Comedy. In three parts and one hundred chapters that mirror Dante's classic poem, Nicolello takes the reader through present-day American towns and cities: infernal, purgatorial, and paradisal aspects with nothing left off the table. In this, the second volume, or Purgatorio, William is delivered from disquieting Jerusalem into the kaleidoscopic world of San Francisco. Here the text's cast of characters extends considerably, taking on issues of the visible and invisible, chemical indulgence in an empire in decline, the fall of irony and the limits of nihilism, and modern concepts of liberation and bondage. Here the surface of things is immeasurably more satisfying than the small town of the preceding volume--but the hollow nature of the visible in time leads the pilgrim to perpetually consider and reconsider issues raised and expand issues introduced in the first volume. At the same time, The Recluse Finds a Way is a celebration of the Bay Area, and a way of life that, for all its purgatorial excesses, leads young William closer to developing a sense of aesthetic mysticism with which to constructively reject the modern world.

Joseph Nicolello: Joseph Nicolello is a graduate student and instructor at Fordham University. Before abruptly retiring from novelistic discourse at twenty-five years old to focus exclusively on pedagogy and scholarly writings, Nicolello also wrote the novella A Child’s Christmas in Williamsburg (October 2020).