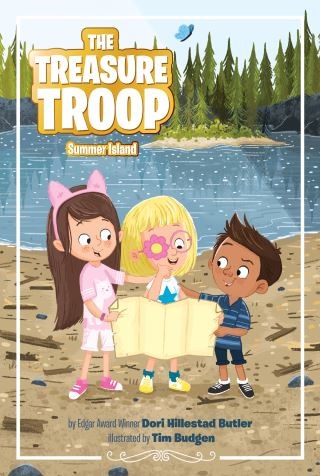 In the third book of this code-busting series, Marly, Sai, and Isla are back on the hunt! Mr. Summerling has left them a brand-new set of clues to follow, including tickets to the mysterious Summer Island. So with tickets in hand, our trio sets off to their late neighbor's island. Can they finally discover what lies at the end of this treasure hunt?

Dori Hillestad Butler: Dori Hillestad Butler's books have appeared on children's choice award lists in 18 different states. Trading Places with Tank Talbott won the Maryland Children's Choice Award in 2007, and The Buddy Files: Case of the Lost Boy won the 2011 Edgar Award for Best Juvenile Mystery. In 2018, she won a Theodor Seuss Geisel Honor for King & Kayla and the Case of the Missing Dog Treats. She is the author of the successful Haunted Library series, and has also been a ghostwriter for the Sweet Valley Twins, Unicorn Club, and Boxcar Children series. She's published numerous short stories, plays, and educational materials, and has served as the Iowa Society of Children's Book Writers & Illustrators' Regional Advisor. She grew up in southern Minnesota and now lives in Seattle with her husband, son, dog, and cat. She visits schools and leads writing workshops all over the country.

Tim Budgen is an illustrator and art teacher. For much of his life he has been scribbling down ideas and can usually be found with a pencil in one hand and a sketchbook in the other! He lives by the sea on Hayling Island, England, with his wife, Julia.